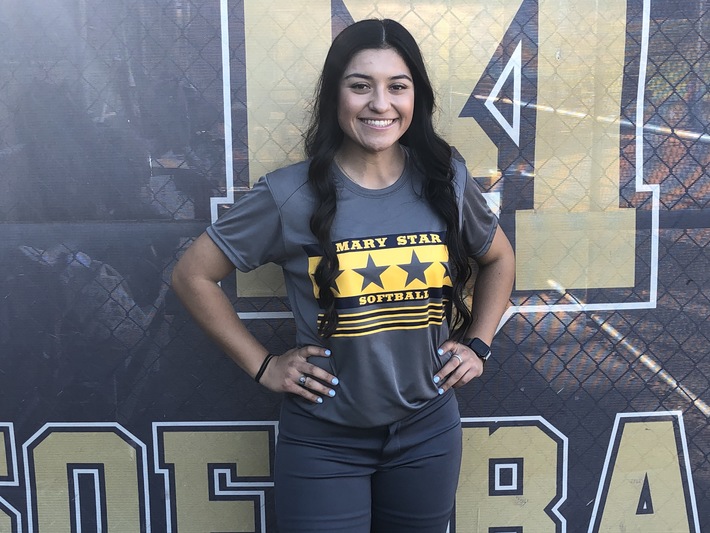 In three and a half years due to the coronavirus cutting her senior season short, Mary Star High softball shortstop Ashley Rico put together a solid prep career for herself, with her biggest achievement coming on November 12, 2019 when she signed her national letter of intent to play Division 1 softball at San Jose State University.

In this first installment of San Pedro News Pilot's Class Of 2020 Senior Spotlight honoring those who had remarkable prep careers in spring sports that had their seasons unexpectedly end early due to the outbreak of COVID-19, we take a look back at the high school career of Rico and hear from her own words in a short interview session.

On March 11, in what turned out the be the final game of her prep career, Rico laced a scorching shot down the left field line for an RBI-double in the bottom of the fifth inning to help seal the Stars' 4-1 victory over Banning of Wilmington in a Torrance National Tournament opening game at Mary Star High.

WHEN YOU FOUND OUT THE SEASON WAS ENDING DUE TO COVID-19, HOW DID YOU FEEL IN REGARDS TO THAT TURN OF EVENTS?: "When I found out the season was over, I was disappointed."

HOW MUCH DID THE COACHES COMING OVER TO VISIT ALL THE SENIORS ON WHAT WOULD HAVE BEEN SENIOR DAY MEAN TO YOU?: "When the coaches came to my house on senior day (May 1), I was so surprised and they made me feel special."

WHAT WAS YOUR FAVORITE SEASON OUT OF THE FOUR YEARS AT MARY STAR?: "Sophomore year, when we made it to the CIF finals. We had the best bus ride ever after defeating Carnegie (Schools of Riverside) in the semifinals knowing we were headed to the CIF championship game."

WHAT WAS GOING IN YOUR MIND BEFORE YOUR RBI-SINGLE AGAINST CARNEGIE IN THE 2018 CIF-SS DIVISION 6 SEMIFINALS: "I knew my team needed me to step up and bring the first run in. I just told myself to relax, see ball, hit ball."

WHAT WILL YOU MISS THE MOST AT MSHS: "Making memories with all my friends."

FINALLY, WHAT IS YOUR MAIN GOAL THAT YOU HOPE TO ACHIEVE ONCE YOU SET FOOT ON CAMPUS AT SAN JOSE STATE?: "To get my degree and be successful in softball."

Rico, who was a 2018 All-CIF Southern Section Division 6 selection and the 2019 San Pedro News Pilot Prep Softball Player Of The Year, plans to major in Management Information Systems and hopefully work for a Tech company, like Apple or Google.