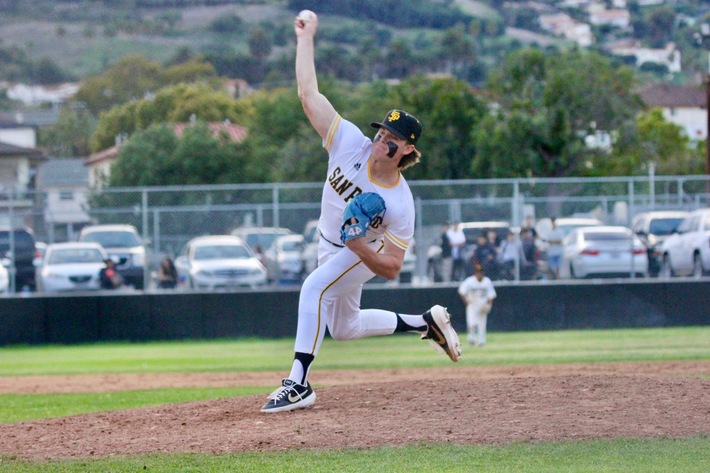 It was a short, but still productive 2020 San Pedro Prep Baseball season, as the coronavirus outbreak put a premature close to the seasons of San Pedro, Port Of Los Angeles and Mary Star Of The Sea High Schools. However, one player stood out from the pack more than anyone.

San Pedro High baseball senior pitcher Travis Connelly got off to a dominant start on February 21 when the Pirates visited Bellflower for their 2020 season opener, as he would face one batter over the minimum in throwing a no-hitter with 10 strikeouts out of 16 batters faced on 53 pitches during the Pirates' 14-0, five-inning victory. Connelly also belted an RBI-double as the Pirates scored nine runs in the top of the second inning.

Connelly also threw a complete game 3-1 victory over Palisades Charter on March 11, in what would be the final game of the season, and won in relief against Santa Monica to finish with a sensational stat line: a minuscule 0.00 ERA, 1 unearned run, 3 hits, 2 walks & 26 strikeouts, while also hitting .375 at the plate with 4 RBIs.

That kind of performance in a short period of time makes Connelly a three-time San Pedro News Pilot Prep Baseball Player Of The Year.

San Pedro would finish 4-2-1 on the year (including a forfeit win over North Torrance) before COVID-19 ended the hopes and dreams of an experienced and deep Pirate team eager to claim a fourth straight Marine League title and plan for a deep run into the CIF-Los Angeles City Section Open Division playoffs. The Pirates will lose Connelly, senior infielder Joshua Duarte and 12 other seniors to graduation, but they will return Jake Harper and Dominic Porter in the outfield and talented shortstop Cain Lusic for their senior seasons in 2021.

Mary Star (8-3) was also having a great season of their own under co-coaches Bobby Ramirez and Tim Ursich Sr., winning their own Cliff Classic Tournament, only losing both doubleheader openers to North Torrance before winning eight straight, and then losing the last of their only two Camino Real League games, 6-2 to St. Paul on March 10.

Port Of Los Angeles (2-8) lost their last six games before their season ended, but against schools with bigger enrollments such as South Gate, North Torrance, Banning, Carson, Paramount and Santa Monica. Junior OF/P Rudy Rios was having a sensational year with a .375 batting average & 6 RBIs, three of which on a booming triple against South Gate on February 25. Senior catcher Anthony D'Anna is headed to Marymount California University.

Before COVID-19 forced the cancellations of every Spring Sports season, Mary Star was scheduled to visit San Pedro on March 18, then host POLA on March 19 at the gorgeous Fromhold Field.

DISCLAIMER: This is a shortened version of the usual All-San Pedro News Pilot Team I would normally conduct for baseball and softball due to all the seasons cut short as of Monday, March 16 due to the coronavirus (COVID-19) pandemic. Yet we still choose to honor the efforts of the student athletes in spite of the circumstance.