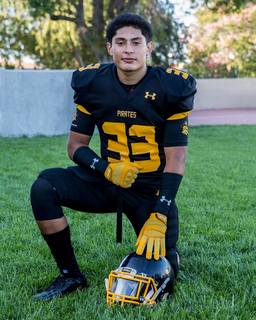 It's no secret that San Pedro High football loves to pound teams to death with an established ground game.

In over 100 years of football the Pirates have produced several great ones like Jim Decker, Ron Barber Sr., Jeff Williams Rod Williams, Holman Wiggins, J'Vone Hibbler, Devin Carter, Cristian Farrow, Darrell 'Deejay' Santiago among others, but none of them have scored more rushing touchdowns in one season than senior running back Chris Alvidrez.

Didn't matter if he lined up at tailback, fullback, or used in one-back offensive sets, Alvidrez shredded up opposing defenses with the added assistance of a deep and experienced offensive line, and the results were evident. Not only that, Alvidrez even became one of the top tacklers on defense after being inserted at linebacker for nine games.

Alvidrez even was a surprise target at times in the passing game, and was a great blocker for other runners on the Pirates' team en route to earning some high honors after the season ended, such as the Marine League Tri-Most Valuable Player and the CIF-Los Angeles City Section Defensive Player Of The Year, and of course, News Pilot Football Player Of The Year so...

For those qualities and more, Alvidrez is the 2014 San Pedro News Pilot Prep Sports Male Athlete Of The Year.

"Chris is a warrior," said San Pedro senior offensive lineman Dominic O'Brien, who paved the way many of times for several of Alvidrez's runs. "He worked hard at practice and wanted to be in every play."

Alvidrez ran for 1,196 yards and a school single-season record 22 touchdowns on 191 carries, an average of 6.3 yards per carry. In five games this season, Alvidrez has ran for over 100 yards, with his highest total rushing for 176 yards on 19 carries and a touchdown in a 38-17 victory over Culver City on September 19. Showing he's got good hands out of the backfield, Alvidrez also caught seven passes for 160 yards and a touchdown.

Playing against a Marine League full of physical teams, it never bothered Alvidrez, who thrived taking on the best the league had to offer, and most of the time, succeeding in running them down, especially when running behind a stout line that featured O'Brien and fellow seniors Robert Villegas and Tyler Castaneda.

"Playing in the Marine League was a great opportunity to gain a lot of experience," Alvidrez said. "Especially in a great league who has great defenses against the run."

One of those league powers that gave Alvidrez his chance to shine is Carson.

The Pirates had two tough November battles with the CIF-Los Angeles City Section runner-up Colts, who fell to Narbonne in the Division I final. Alvidrez had a touchdown run in both meetings, along with catching a two-point conversion pass in the 33-30 City Section Division I semifinal loss on November 28.

On November 7, Alvidrez tied Jeff Williams' single-season record for rushing touchdowns with an early three-yard touchdown run during the Pirates' 17-15 victory over Carson which gave them a share of the league crown and the top seed of the playoffs. The record was all his the following week when Alvidrez's short one-yard touchdown run in the first quarter sparked San Pedro to a 28-7 victory over Roosevelt of Los Angeles in the first round.

"I got to say it feels good to be the sole owner of the record," Alvidrez says. "I'm proud to be part of Pirate history."

October 24 took on a whole new meaning for Alvidrez when San Pedro hosted Washington of Los Angeles for their Breast Cancer Awareness game.

San Pedro football assistant coach Petey Ponse asked Alvidrez to honor a 6-year old girl named Jaelyn who was in Ponse's son's class and passed away due to brain cancer in January. So Alvidrez wore a shirt with her picture on it underneath his uniform to honor her memory. Alvidrez ended up scoring four touchdowns in the 52-0 victory and on his first two scores, he pulled up his jersey to reveal the picture of Jaelyn and blew a kiss to the sky.

"Coach Petey asked me if I wanted to honor Jaelyn and I was more than happy to do that," Alvidrez said.

Alvidrez, who was the Marine League Co-Offensive Player Of The Year as a junior, was also more than happy to help out the defense the second Marine League started, and he responded big time in nine games with 77 tackles, two sacks, three pass deflections and a forced fumble. "It was great to play with Chris, watch him go both ways and make such important plays for our team," San Pedro junior quarterback Jacob Miller said. "He had a great year offensively and defensively."

In spite of all his individual accomplishments this season, Alvidrez was much more proud of the team achievements than anything else, as he helped San Pedro finish 11-2 overall in 2014 and claim their second Marine League crown outright or shared in four years.

"We worked hard all year and had a great season," Alvidrez said a week after the semifinal loss to Carson. "We didn't leave the field sad because we lost. We left sad because it was our last game we would ever play together."

(Note: This is a special modified repeat of an earlier article; photo courtesy of Vince Pirozzi)