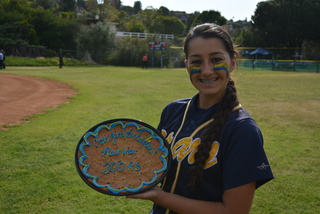 There is no question, or doubts if there were any, that no one meant much to a team more than Mary Star High softball pitcher Marina Vitalich meant to the 2014 edition of the Stars.

With eight seniors gone from the 2013 team that reached a CIF-Southern Section Division VI final and not much of a consistent offense to help her out in most cases, the George Mason University signee took on more of a leadership role from a vocal standpoint, and did a lot of things beyond striking out opposing hitters with deadly efficiency.

Outside of her own sister Amanda, a gifted sophomore shortstop, Marina was one of the better hitters at Mary Star who never seemed to have an off day at the plate, batting third in the lineup and sometimes even hitting at the lead-off position.

Marina also didn't play her entire junior season at 100%, with injuries to her wrist on her throwing hand at the start of the season, and then there was the ankle sprain where she stepped into a hole while practice pitching at Cantwell Sacred-Heart of Montebello in a critical Camino Real League battle. Not to mention the battles she endured against teams that had long playoff runs in the CIF-Southern Section.

Vitalich survived all those trials and tribulations, while surpassing all of her own expectations to becoming the 2014 San Pedro Prep Sports Female Athlete Of The Year.

"We lost several seniors and I knew I had to step into the leadership role because we had a young team," says Marina, who went 15-7 with a 0.64 ERA, striking out an incredible 321 batters in 151 innings, issuing only 21 walks.  "I felt the team did great considering how young we were."

Vitalich, a three-time All CIF-Southern Section selection and two-time Cal-Hi Sports All-State Underclass selection, also carries a sparkling 4.1 GPA for seven semesters thus far at Mary Star, and if she's not striking batters out, she's also dialing long distance from three-point range as the top outside shooter and passer on the girls basketball team, as she made All-Camino Real League second team for the Stars and second-year coach Victor Tuberosi.

"Marina had an outstanding year and has definitely become one of the great San Pedro pitchers of all time," Mary Star softball coach Gregg Aguilar said. "She has positioned herself to be included with names like (San Pedro legend) Ashley Esparza and Petty, two of the greatest pitchers in this town's history."

Not for Marina Vitalich, who held her own against all of them. Most of the losses suffered during that stretch came in the final inning, or in extra innings, along with 1-0 losses to Ontario Christian, Santa Monica and St. Bonaventure. Vitalich was able to beat Cantwell on the third try with a solid three-hit shutout with 17 strikeouts in a 3-0 victory for the Stars on May 1, while beating St. Monica all three times.

Vitalich battled to a scoreless draw (no extra innings allowed) with Rolling Hills Prep in a pitcher's duel with their ace, Isabella Berouty in an April 24 duel between the neighboring schools, but Vitalich out-shined Berouty by hurling a no-hitter and 15 strikeouts, one of seven no-hitters Vitalich hurled in 2014.

Marina had a pair of 19-strikeout victories over both Harbor Teacher Prep (another no-hitter) on March 28, and Oxford Academy on April 11. Out of the seven no-hitters, two of them were perfect games, including a stellar 17-strikeout performance on March 13 against Calvary Chapel of Downey for her first career seven-inning perfect game.

Vitalich had 116 of her strikeouts in Camino Real League play, six of them were shutout victories.

Yet the victory over Cantwell that prevented the Cardinals from going unbeaten in league was Marina's greatest joy of the year.

"Cantwell has always been our biggest rival," Marina says. "Shutting them out with 17 strikeouts was special but stopping their undefeated run was even better. Nothing is better than beating your rival."

The other side of the field wasn't a problem either for Marina, as she hit .407 with four home runs, 15 RBIs and 15 runs scored. Vitalich has deceptive speed as well, stealing five bases. Vitalich hit eventual game-winning home runs in league victories over both St. Monica and Serra of Gardena in April.

"We are very lucky to have such a great player at Mary Star and even more so because she is a wonderful young lady too," Aguilar said. "She puts in the work weekly all year long to get to the level she is at."

Mary Star will be provided another challenge for 2015 as the Camino Real League gets a brand-new look due to recent CIF-Southern Section realignment. St. Monica and Serra remain along with the Stars, but Bishop Montgomery, Pomona Catholic and Bell-Jeff replace Cantwell and St. Bernard (who didn't field a softball team in 2014).

As she enters her final high school season, Vitalich and the Stars will no doubt look conquer this latest challenge.

"We proved we could play with anyone even though we are a small school with 500 kids," Vitalich says. "Our top five hitters return next year and I can't wait to play in our newly aligned league."

(Note: This is a special modified repeat of an earlier article; photo courtesy of Mike Vitalich)