Mary Star Girls Basketball Gets Vindication In Rout Of POLA 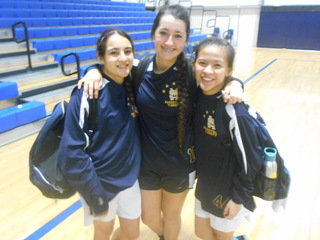 Sometimes a loss of epic proportions are hard to let go, even if it is a crosstown battle.

Mary Star High girls basketball felt like they needed to redeem themselves after suffering a 55-32 loss to neighbor Port Of Los Angeles in the third place game of the Firebaugh Tournament last season. For senior guard Marina Vitalich, it was a little more deeper than that.

On December 12, 2012, the last time POLA visited the Mary Star gymnasium, the Polar Bears humiliated the Stars in a 62-11 rout, so being the only remaining member of that Mary Star team, Vitalich and company wanted this one bad.

In a game that was never in doubt from the opening tip, Mary Star unleashed a relentless full court press that caused a ridiculous 39 POLA turnovers, including 32 steals, to completely overwhelm the visiting Polar Bears, 65-26 in an intersectional duel. Both teams tried to shake off the rust from both teams playing their first games since mid-December but the Stars did a better job of that despite missing 24 layups.

"After losing two years in a row, it felt pretty good to pull out the win," said Vitalich, who had 7 points, 6 rebounds, 4 steals and 3 assists. "I'm happy all our hard work has started to pay off."

Indeed it has for Mary Star (7-4 overall), as they were able to dissect a young POLA (3-4) team that was paced by sophomore guard Kyerstin Galloway's 15 points, but Galloway wasn't able to get much help from her teammates.

Galloway's two free throws tied the game early at 2-2, but then sophomore guard Angela Pisano went off for the final nine points of the first quarter to stake Mary Star to an 11-2 lead, and the Stars cruised from there. The Polar Bears did not make a field goal attempt in nine tries in the opening period until junior forward Alexis Solis converted on an 'And-1' layup to open the second quarter.

"We are a defensive team," Pisano declares. "And when we play our defense well, our game has a positive effect. Our rebounding was also a big part and helped us get motivation to run our offense."

Pisano finished with a game-high 31 points on 14-of-28 shooting (no three-pointers), while also contributing with seven steals and two rebounds. Pisano made all three of her free-throws, and unlike her 42-point explosion against Downey Calvary Chapel two months ago, she got some well-needed balance from her teammates.

"I'm glad I contributed but I'm very proud of this team as a whole to get the win we strived for," Pisano said.

Despite not scoring, sophomore forward Amanda Vitalich had six steals for Mary Star, who continues play Thursday at home against Capistrano Valley Christian.

"Our team, especially our starting five, is really starting to jell," Marina Vitalich says. "We have a young group but we are athletic and having more players who can shoot and score to take the pressure off Angela. That will only help and continue to make us better."