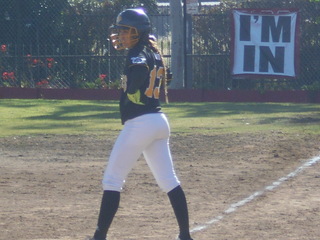 WILMINGTON - No one will ever mistake San Pedro High softball junior right fielder Chase Wong for the late, great baseball Hall Of Famer Babe Ruth, but in a way, Wong made a nice impression.

Earlier on in the week, Wong hit her first career home run against defending CIF-Los Angeles City Section Division I champion Carson and was feeling pretty good about herself, but not in an arrogant way, and on the bus ride to the Wilmington Athletic Complex for a pivotal Marine League game against Banning of Wilmington, she said she was looking to drive one out of the park as soon as possible.

It would not take long for Wong to deliver on her prognostication.

On just the sixth pitch of the game, Wong, who hits lead-off, drilled a 3-and-2 pitch just over the left field fence for a solo home run, which would immediately set the tone and galvanize the Pirates to an eventual 8-4 win over Banning.

"Chase definitely ignited a fire in us and motivated us even more to beat Banning," San Pedro junior second baseman Johnie Cortez said. "We already wanted to beat them because it was an important game, and her home run really pumped us up."

There wasn't any secret to the whole moment, Wong just wanted to make her mark in any way she could.

"I was extremely happy but I knew it was going to happen in this game," Wong said on her home run. "I just didn't expect it to be in my first at-bat. I was just looking to hit it hard, then it went over."

With this win, San Pedro (19-8 overall, 5-3 league) set themselves up for a possible first round home game in the CIF-LACS Division I playoffs and claimed its second victory over Banning (17-11, 6-2) in six days, following up their 8-7 victory over the Pilots last Saturday in the seventh place game of the El Segundo Tournament.

Banning had won the earlier meeting, 9-0 at San Pedro High on April 8.

Right after Wong's homer, San Pedro would add a second run on senior first baseman Armida Roman's two-out fielder's choice that drove home junior left fielder Cayla Ezelle, who doubled on the next pitch that followed Chase's solo round-tripper. The lead would extend to 3-0 in the fourth inning as Wong's grounder skirted past the glove of Banning senior shortstop Noelani Boyer which allowed Cortez to score.

Never undaunted, the Pilots would strike early off San Pedro senior pitcher Jaclyn Rivera as junior right fielder Sara Lopez's two-run single cut the Pirates' lead down to 3-2 in the bottom of the fourth before Rivera retired the next three batters.

San Pedro would then work on a two-out rally in the top of the fifth which broke the game open.

An error and two fielder's choices would set the stage for San Pedro. Roman singled to put runners on first and second, then a wild pitch advanced both Roman and freshman designated player Andrea Cline a base, then Cortez rocketed a shot into the left-center field wall for a double to drive both home. The bases were then loaded after senior shortstop Angelina Boskovich walked, and senior center fielder Doreen Corella was hit by a pitch.

Here comes Wong again, and this time, she blasts a two-run single to center field, driving in Cortez and Boskovich, and suddenly, the Pirates had a 7-2 advantage before Ezelle ended the inning by grounding out.

"I was just trying to help my team and was thinking to myself that I was not going to get out," said Cortez, who went 2-for-4 with two doubles. "I just wanted to help my team win."

Senior third baseman Monica Rodriguez blasted an RBI-double for Banning to make it 7-3 with two outs in the bottom of the fifth, but Ezelle's snow cone catch in left robbed Lopez of two more runs to end the inning. Then Roman's RBI-sacrifice fly in the top of the sixth inning increased San Pedro's lead to 8-3.

Rivera had to endure one more threat in the bottom of the seventh inning as Boyer's one-out single and Rodriguez's walk led to another RBI-single from Lopez which cut Banning's deficit down to 8-4. A fielding error from Boskovich on a ground ball smash from senior catcher Jazmin Ruvalcaba loaded the bases.

Remembering all too well how Banning let a 6-1 lead slip away last Saturday against San Pedro, Rivera was determined not to let San Pedro's lead disappear, as she got Banning sophomore pitcher Kiara Mendoza to line out to Ezelle, keeping the bases loaded, and then inducing a ground ball by sophomore Elyzza Guajaca come right back to Rivera for the final out of the game.

"I was so glad that she pitched a great game for us today," said Wong, who ended up going 3-for-5 at the plate with the home run, and 3 RBIs for San Pedro.

On a pitching staff where a seven-inning complete game is hard to come by, Rivera (5-2) gutted out a performance where she allowed four runs (three earned) on eight hits and two walks with five strikeouts for her first complete game win of the season.

San Pedro can potentially end the season in a tie for second place if Carson wraps up a perfect Marine League title run on Wednesday against Banning, and the Pirates close out the year with two winnable games against Gardena on Monday at San Pedro High, then at Washington of Los Angeles on Wednesday knowing they now own the head-to-head tiebreaker edge over the Pilots.

"It feels good to know that we can beat a good team on their home field," said Wong, also remembering how close the Pirates came to defeating Carson on the road earlier this week in a 10-8 loss.