POLAHS Softball Comes Of Age... Even In Defeat 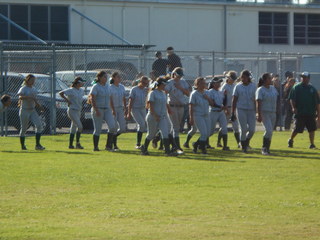 CARSON - No one expected Port Of Los Angeles High softball to make it this far.

After dominating the CIF-Los Angeles City Section Division III realm for three years, claiming championships as a result for it, the Polar Bears made the bold decision of challenging themselves by stepping out of the Small Schools circuit into the deep waters of Division I.

Not only did POLA come out of making that decision with a dynamite beginning of winning the Redondo Tournament, they earned the third seed of the playoffs made it all the way to the CIF-LACS Division I semifinals, where defending champion and second seeded Carson finally ended the Polar Bears' quest to make it to UCLA with a narrow 2-0 victory.

"I am so unbelievably proud of this squad," POLA co-coach Melissa Bugarin-Espinoza said. "They elevated their play each year and have showed the character of this program. It was heartbreaking the way we lost, but I tip my hat to Carson."

All it took was one break, and the Colts (27-5 overall) capitalized on it.

"We couldn't punch the card when we needed and they did," Bugarin-Espinoza said. "So we will use that to be our drive next year. "

Carson advances to Saturday's City Section Division I final at UCLA against fifth-seeded Chatsworth, who stunned top-seeded El Camino Real of Woodland Hills, 2-1 in 12 innings in the other semifinal. The Colts will be pursuing a third City crown in four years.

The loss may have been the first ever in a playoff situation for POLA (30-8), but they sure handled it well with the grace of a true defending champion, so did the awesome effort of junior pitcher Nicolle Miranda in the way she was able to handle the dangerous bats of four NCAA Division I-bound Carson studs. Miranda allowed just three hits with a hit batter and 8 strikeouts, and only the one hit by the Long Beach State-bound Maulupe left the infield.

POLA certainly had their chances despite leaving eight runners on base, but the defense of Carson was on point in aiding their pitching tag team of senior Ramie Barajas and freshman Jessica Robledo, who surrendered four hits (two to POLA senior right fielder Sarah Maldonado) but still combined for the shutout.

Sophomore second baseman Danika Justis (Cal State Northridge commit) fields a hard hit ground ball by POLA freshman designated player Analise De La Roca to end the top of the first inning with a strong throw to Tautalafua at second before the UCLA-bound Tautalafua finishes with an equally strong throw to first for a 4-6-3 double play.

Younkin drilled a hard line drive that grazed the glove of Carson sophomore left fielder Cynthia Ruiz, who still recovered to fire a perfect cutoff throw to Tautalafua who gunned down Younkin at third base to end the top of the fourth inning.

Robledo, from her right field position to start the fifth inning, fires a dart to first base, retiring POLA junior left fielder Tiffany Mercado who appeared to have a leadoff single.

Arizona-bound junior catcher Hillary Edior picked off POLA senior shortstop Kelsea Short off first later that same inning when POLA loaded the bases with one out, then Miranda was caught looking at a third strike two pitches later from Robledo to end that threat.

In the sixth inning, POLA senior first baseman Allison Bayer hit a one-out single and reached third on a two-base throwing error an out later, but Robledo induced a pop out to second by Younkin to end the inning. Finally, Maldonado stroked a two-out single to center field in the seventh, then advanced to second on an error before Short flied out to center field for the final out of the game.

"We have a saying 'tradition never graduates' and they stressed to these underclassmen to keep pushing work ethic, discipline and character," Bugarin-Espinoza says of her four seniors, Bayer, Short, Maldonado and Stephanie Ramirez who combined in their four years to win 10 championship rings. "They embodied these things and I know the other girls have bought into it and will keep passing it on throughout program."

Despite the first City Section playoff setback in their 13th playoff game in the school's short four-year history, POLA has nothing to be ashamed of. They not only set a school record for victories in a season (30), they claimed the Redondo Tournament Gold Division title, a pair of Bronze Division titles in the Torrance National and Las Vegas Spring Jamboree Tournaments, a fourth straight unbeaten Crosstown League title, and for a little extra bragging rights, a pair of victories over crosstown neighbor San Pedro.

The resolve of POLA is very strong, so don't be surprised if the Polar Bears make another run at the Division I championship in 2015.

"I am proud of my girls they did not down play Carson and they just wanted to prove we could play with them," Bugarin-Espinoza said. "We wish the Colts well in their quest to defend their title and we promise we WILL be back!"