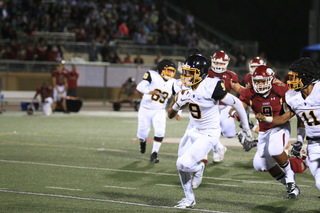 The San Pedro High football team had a rough Marine League stretch during the 2017 season but they came out of it victorious in their final game on November 3, a 35-0 victory over host Washington Prep of Los Angeles to finish 5-5 overall, 2-3 in league play.

Senior wide receiver/defensive back Corey Fausto was the biggest catalyst of that victory, as he caught five passes for 147 yards, and three touchdowns, a career-night for the three-year varsity veteran who has made some memorable plays throughout his time as a Pirate.

In spite of the struggle, Fausto still saw a positive in that whole experience.

"It still hurts knowing we didn’t come out on top for those three games," said Fausto of the three straight league defeats to Carson (25-17), Narbonne (57-7) and Banning (21-14) to close the month of October. "But I feel like it brought us closer together as a family. Throughout that week of practice (for Washington Prep), the coaches preached tempo and never slowing down. With having that mindset reiterated in my brain, I had to make sure I did my part so we could close out the season with a bang, and the fact that it meant scoring three touchdowns made it that much sweeter in the end."

Even after losing five of their final seven games that erased a 3-0 start to the year, San Pedro still qualified for the inaugural CIF-Los Angeles City Section Open Division playoffs as the last of the eight teams due to a Cal Preps ranking, which means the Pirates must face again, top-seeded Narbonne this Friday, 7 pm at Narbonne High.

Being a true gamer, Fausto embraces the opportunity.

"It’s an honor to be considered one of the top eight teams in the LA City Section, and it honestly doesn’t affect me negatively that we’re facing Narbonne once again," Fausto says. "I know what we are capable of."

So far this season, Fausto has caught 25 passes for 586 yards, a 23.4 yards per reception average, and nine touchdowns for San Pedro, and has made timely catches whenever the Pirates needed a first down, or a touchdown. On defense, the two-time All-Marine League safety has 63 tackles (43 solo) with two pass deflections and a forced fumble.

Fausto was involved in perhaps the biggest defensive play for San Pedro during their run to the CIF-LACS Division I semifinals last season.

Against Palisades in the quarterfinals, fellow senior RB/LB Sean Davenport stripped the ball from a Dolphins running back. Fausto scooped the ball up on a bounce and ran untouched for a 61-yard touchdown late in the first quarter for San Pedro's only touchdown of the night, leading to an eventual 13-10 victory. No one saw that moment coming, not even Fausto.

"It all happened so suddenly that it even caught me by surprise," said Fausto, who also extended his gratitude to Davenport for causing the fumble.

One of Fausto's proudest moments during his junior season was when the Pirates took on Banning at the Los Angeles Memorial Coliseum, where he had five tackles, two of them hard hits, during the Pirates' 20-7 victory. "It was so surreal. I never in my 17 years would have expected to see myself starting a game inside of the Coliseum," Fausto said of the experience.

Now in a more prohibitive role offensively, Fausto has thrived with some incredible catches against Banning, Lawndale, Downey and his 22-yard first down catch against Narbonne which set up a Davenport touchdown. Fausto also turned a screen pass against Carson into a 61-yard gain, setting up his own eight-yard touchdown reception.

It's no secret anymore... Fausto makes big plays, when the big plays are needed.

As we continue this special San Pedro News Pilot Class Of 2020 Spotlight feature series on student athletes at the San Pedro-based high schools whose senior years were cut short due to the coronavirus, here is our feature on San Pedro High School baseball infielder.In three years time, Duarte has carved his own path in a very athletic family as being a proven clutch…See More
20 hours ago
0 Comments 1 Promotion