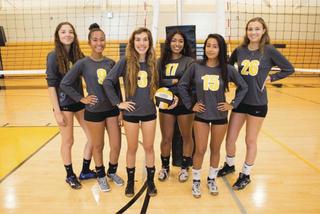 It's the 'you mess with one, you get us all' mentality.

That's been the theme for San Pedro High girls volleyball throughout the 2017 season as the Pirates battled through adversity all year long to snag the eighth and final spot of the CIF-Los Angeles City Section Open Division playoffs, becoming the first San Pedro High sports team in the Open Division era to make that exclusive playoff bracket that is only for Division I schools that are fortunate to be in the top eight at the end of the year.

Perhaps the biggest reason why, the Pirates were blessed to have not one, not two, but six sensational outside hitters and middle blockers to finish off rallies. And what sets them all apart from most talented teams, is that they are all willing to share the love on the court as a close-knit family.

Most schools would be thrilled to have one or two solid outside hitters, but the Pirates were stacked in 2017 with five in the likes of All-Marine League returning juniors Sara Peterson and Lauren Sutrin, rapidly improving senior outside hitter Leinea Mueller, senior middle blocker Rebecca Alvarenga, and the sensational sister tag team of senior Selene Ramirez and highly regarded freshman Serena Ramirez.

Call them the 'swinging sisters' if you will, but that's exactly how they like it.

"We're literally a big group of sisters," Selene Ramirez says. "I feel so honored to be able to play with such amazing girls by my side who continue to inspire me every day."

San Pedro, after a solid, modest showing in the CIF-LACS Open Division playoffs that ended with a dramatic 25-21, 25-23, 26-28, 20-25, 15-12 victory at Marine League rival Narbonne of Harbor City in the seventh place game last Thursday, has automatically qualified for the CIF State Playoffs. The Pirates (15-12 overall), seeded No.13 in Division 3 for the Southern California Regional, will play at fourth-seeded La Reina of Thousand Oaks Wednesday at 7 pm.

"(Qualifying for CIF State playoffs) is exciting and a great accomplishment for us," Peterson said.

Although the Pirates tied for second with Narbonne in Marine League play at 9-3, they were the only team that even managed to take a set off eventual eight-time league champion Carson in a 22-25, 27-25, 25-18, 25-23 loss on October 5 at San Pedro High (the Colts swept the other 11 league matches in three sets). In the Open Division playoffs that concluded this past weekend, the Pirates exhibited a fierce attack at the net against top-seeded Palisades in the opener on November 2, nearly taking the second set in a 25-18, 28-26, 25-16 loss.

"No matter how we did in league, we deserved to be in the Open Division," Sutrin said. "Our effort against Palisades proved it. We are a driven and competitive team, and hopefully this is the first of many years to come competing in the Open playoffs."

San Pedro was then swept by Carson a second time in the consolation semifinals on November 7 before their thrilling victory at Narbonne two nights later, the second time this year the Pirates won in Narbonne's gym, also going five sets on September 26 in which the Pirates rallied from a two games to one deficit.

In that second victory over the Gauchos, Peterson shined again with a career-high 22 kills to go along with seven digs and four aces, and Serena Ramirez was pivotal as well with ten kills, three blocks and a pair of aces.

Sutrin made instant impact last season during her first year on varsity, as her tall presence forced the opposition to adjust to either avoid or neutralise her effectiveness. Sutrin made the move to right side hitter so that the Pirates could take full advantage of the height and length possessed by Alvarenga, a three-year veteran who has also excelled in soccer, water polo and swimming during her high school career at San Pedro.

"Lauren is an amazing athlete," said Alvarenga of her fellow twin tower.

Another key to San Pedro this season has been the swift and sudden effectiveness of the Ramirez sisters.

Selene, another three-year varsity veteran, led the team in kills during Marine League play as her killer instincts make her stand out. Serena, a very accomplished beach player at such a young age, brought a whole new level of talent and a devastating long range jump serve that has led to countless San Pedro points in critical moments.

Not to be outdone, Mueller has been one of the most improved players anywhere, one of the best at receiving serves and her leaping ability on attacks has led to some awesome kills and timely blocks. In the four-set loss to Carson, Mueller led the Pirates with a career-high 12 kills.

Both Peterson and Mueller are no strangers to pressure considering they too had sisters that came through the program. Sara's sister Paige was a former three-time All-Marine League selection (2012-2014), while Leinea's sister Miranda went on to play at Los Angeles Harbor College. Paige and Miranda were both members of the 2013 Pirates that were part of the unforgettable fifth set comeback to defeat Banning dubbed 'The Miracle On 17th Street."

"(Miranda) has always been there for me, teaching me the basics and how to play, so I knew I had some big shoes to fill," Leinea said. "Coming into this season I've grown a lot, and I know with her, my family and my teammates' support, we can have a good comeback like (the 2013 team) in our matches."

Although the 'swinging sisters' are great, fourth-year coach Chris Ceballos still has other weapons in senior opposite hitter Alison Mernin, senior two-time All-Marine League libero Alison Lyons, rising sophomore setter Rosie Lopez, junior S/OH Sosha Williams and sophomore defensive specialist Georgie Smith to lean on, which is why San Pedro is not an easy team to deal with, regardless of what the final scores say.

"We've trained hard to stay resilient," Lyons said. "And we're going to give our best efforts out there on the court."

This will be San Pedro's first CIF State playoff match since the 2005 CIF-LACS Division I championship team, who lost in three sets to Esperanza of Anaheim in a CIF Division I Southern California Regional first round match.