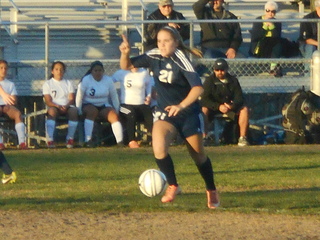 Mary Star High girls soccer was down a goal, in danger of dropping their first game of the 2013-2014 season, but they didn't panic, nor did they have to look far for the one player they counted upon to drive them back.

UC Santa Barbara-bound Jordyn Alves may have scored arguably the biggest of her 51 career goals in her storied four-year career, as she was able to somehow get a breakaway opportunity after a missed kick by Port Of Los Angeles freshman defender Alyssa Medrano. Alves would then use her left leg to seamlessly tap in a dramatic goal past the outstretched arms of senior goalie Nicole Sierra to forge the tying goal in the 79th minute.

Alves' dramatic and clutch moment would allow the Stars to remain undefeated with a 2-2 tie at Daniels Field in an intersectional duel that also kept the host Polar Bears undefeated as well, yet it was overly frustrating for them to not hold on for what seemed to be a third straight victory to begin their season.

POLA (1-0-2 overall) also gave up a tying goal in the 75th minute in their previous game, a 3-3 tie with California Academy of Math and Science just last week.

The goal from Alves also capped off a solid second half for Mary Star (2-0-1), who was able to take advantage of POLA switching goalies, as junior goalie Daisy Garcia stopped three shots to blank the Stars in the game's first 40 minutes of action.

Absolutely no pressure on the part of Alves, as she was all locked in and focused in that last minute once she got the opening she wanted.

"I really didn't think about anything, I just thought I needed to score for my team," said Alves, who also provided an assist in the 60th minute with her corner kick that was headed in by junior midfielder Dori Lindeman. "We worked really hard the entire game, and I felt like putting that last goal away rewarded them for their hard work."

Evenly matched was the only way you could describe this rare crosstown showdown.

Junior midfielder Isabela Van Antwerp would get the game started off with a goal in the 29th minute for POLA to grab a 1-0 lead after several missed opportunities by herself, and freshman forward Anna Vidovich, who had three shots on goal for the Polar Bears.

Lindeman's goal where she blasted in Alves' corner kick past a hard-charging Sierra would even up the score, but Van Antwerp struck again in the 69th minute as she was able to slip through for her second goal off Vidovich's assist.

"It was exciting," Alves said of Lindeman's goal. "Dori and I have played together for three years now, and we're finally clicking. It was really amazing that she got that opportunity."

Sierra's diving stop of a 30-yard free kick attempt by Alves was nearly a game-saver for POLA in the 73rd minute but the Polar Bears weren't able to put the game away three minutes later, as junior midfielder Ariella Martinez's 15-yard free kick sailed well over the center area of the goal, giving the Stars a well-needed break.

The Polar Bears got a yellow card for delay of game as sophomore defender Madison Pepper was about to blast away with a free kick, and that's when Alves struck. Once Medrano wasn't able to get a hold of Pepper's kick, Alves would suddenly break free and somehow sneak in a shot past Sierra (four saves) for the dramatic tying goal, much to the dismay of POLA, and to the delight of Mary Star.

"From the defense, to the midfield, to the forwards, everyone worked really hard out there today, and I'm really proud of everyone," Alves said.

Mary Star and POLA both continue their seasons on Friday, as the Stars travel to Brethren Christian of Huntington Beach, and the Polar Bears will host Long Beach Cabrillo.

For a school and sports year that ended sooner than expected, the San Pedro Prep Sports 2019-2020 season still had its strong points.There were eight league champions (none from the Spring Sports due to all those seasons ending early due to the coronavirus pandemic), four on-campus signing day ceremonies, four regular season tournament champions, and two CIF-Los Angeles…See More
Sunday
0 Comments 1 Promotion

Announced on July 20, the California Interscholastic Federation has postponed all sports in the Fall semester, making the high school sports season to start as early as December 2020.The three traditional seasons - Fall, Winter and Spring - are now tentatively scheduled to be condensed together between December and June into two seasons, Fall and Spring, due to the…See More
Jul 31
0 Comments 1 Promotion