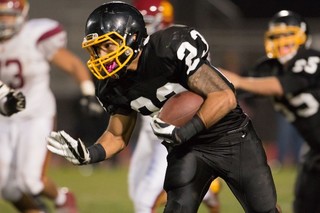 Senior RB/WR/LB Pete Palacios played his heart and soul out for the Pirates, who went 8-4 overall and placing third in the cutthroat Marine League for the second straight season, as he went above and beyond in most games for San Pedro on both sides of the gridiron, but his presence was mostly felt on the defensive side of the ball, as the City bestowed upon Palacios the 2013 City Co-Defensive Player Of The Year award.

Palacios, also named the Marine League Co-Most Valuable Player, led the Pirates with 111 tackles, 65 of them solo, and 17 tackles for loss, along with three sacks, one forced fumble, and three fumble recoveries. Palacios' lone interception was a 55-yard return for a touchdown on October 11 in the Marine League opener against Carson.

Offensively, Palacios also ran for 820 yards and 9 touchdowns on 120 carries, while also catching 23 passes for 310 yards without a touchdown. In his three years at San Pedro, the Pirates went 28-9, with a 19-4 record at Pirate Stadium, reaching the City Section semifinals as a sophomore, and the quarterfinals as a junior and senior.

Setting the tone in the season opener at Morro Bay on August 30, Palacios ran for a 73-yard touchdown on the opening play of the third quarter to spark the Pirates to a 21-0 victory. In the regular season game at Fairfax of Los Angeles on October 4, Palacios forced and recovered a fumble on one defensive sequence, in the quarterfinal playoff loss at Venice, he caught a pass in between three Gondolier defenders for a 33-yard gain.

Chris Alvidrez was also named the Marine League Co-Defensive MVP after leading the Pirates with 949 rushing yards and 12 touchdowns on 158 carries.