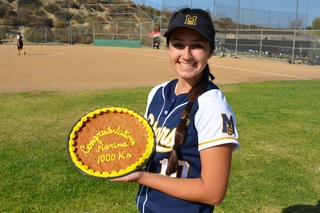 On Tuesday, the George Mason-bound phenom reached yet another one in the form of 1,000 career strikeouts.

In the top of the second inning, Vitalich notched her historic moment when she got her fourth of 11 strikeouts during the host Stars' 10-0, five-inning victory over Pomona Catholic in a Camino Real League game, which ended up as the third perfect game of Vitalich's storied four-year career at Mary Star. For her career, Vitalich's strikeout total is now at 1,007 as she now takes aim at passing former San Pedro High softball great Taylor Petty's mark of 1,025 career strikeouts.

"Playing with her since childhood I've seen her grow immensely, I had no doubt in my mind she would get to 1,000 strikeouts," Mary Star senior second baseman Lexie Geich said of her fellow four-year teammate. "Marina is talented, dedicated, and a hard worker. I'm proud to be her teammate and her friend."

Once the 1,000th strikeout was complete, the game briefly stopped as Mary Star softball coach Gregg Aguilar with the home plate umpire's blessing, gave Vitalich the ball she pitched to get that milestone as a keepsake souvenir, one of many milestone achievements that Vitalich has came through for as she owns just about all of Mary Star's softball pitching records.

"No matter the caliber of teams she has faced, she has been a strikeout machine," Aguilar said. "Marina has continued to evolve as a pitcher every year which has been the key to her success, and the reason teams we play year in and year out still can't match her."

Vitalich also drove in two runs at the plate with a double, while her sophomore sister shortstop Amanda went 2-for-3 with 2 RBIs. Sophomore catcher Gianna Fletcher also went 2-for-3 on the day. Also hitting a double was sophomore Gigi Gentile, who made her first appearance for Mary Star after transferring from neighbor Port Of Los Angeles.

"We hit very well today," Aguilar said. "There were some times today where the other team helped us to extend the inning but we were able to capitalize on their mistake which we haven't done much this year."

In spite of the team accomplishment considering the Stars (12-3 overall, 2-1 league) are still in the hunt for a third Camino Real League title in four years, it is still Marina Vitalich's star that shined the brightest on this day.

"(Reaching 1,000 strikeouts) honestly leaves me speechless and humble," says Vitalich, who has only allowed three runs all season long. "I'm so grateful to have reached this milestone because it shows just how much hard work truly pays off. I'm incredibly happy with the team's accomplishment because this victory shows just how much we are really pushing for the league title. We compete and that's all I can ask of the team."

A real Star plays with the team... and you can rest assured that Marina Vitalich embodies that fact.

As we continue this special San Pedro News Pilot Class Of 2020 Spotlight feature series on student athletes at the San Pedro-based high schools whose senior years were cut short due to the coronavirus, here is our feature on San Pedro High School baseball infielder.In three years time, Duarte has carved his own path in a very athletic family as being a proven clutch…See More
1 hour ago
0 Comments 1 Promotion