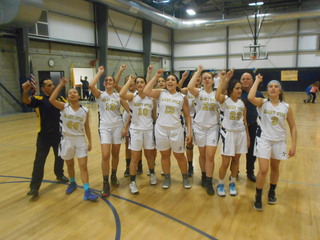 All of that has now officially been laid to rest.

The Mary Star High girls basketball team used a dominating 'desert swarm' defensive pressure to jump to a 16-0 lead in the first two minutes to power their way to a 72-18 victory over visiting Bell-Jeff of Burbank in a Santa Fe League opener, emphatically putting an end to a long, suffering 39-game losing streak in league play (all in the Camino Real League).

"This truly feels amazing," said Mary Star senior guard Marina Vitalich, the team's lone four-year veteran who was a part of 24 of those 39 defeats. "This being my senior year and finally getting that first win that has eluded us every year gave us that much more confidence and faith that we can achieve the goals we set together."

In the first minute alone, sophomore guard Angela Pisano gets a quick layup after a steal and assist from freshman guard Hanalei Emnace. Vitalich intercepts the inbound pass and hits a mid-range jumper. Then the defense forced a five-second violation, then Vitalich and Emnace drill back-to-back three-pointers from the left corner.

Pisano scored two more times and junior forward Devan Avalos added a layup, and it was 16-0 Mary Star in only two and a half minutes before the Guards could blink.

Pisano led the way with 22 points to pace Mary Star, while Vitalich and sophomore forward Kaitlyn Martinez each scored 10 points. All but one of Mary Star's ten players had at least one field goal, which is crucial to team balance and chemistry for a team that is one of the favorites in the new league, along with St. Genevieve of Panorama City and St. Pius X/St. Matthias of Downey.

"To be able to play as a team and not as individuals is reassuring to me," Vitalich says. "I'm sure everyone else that we can count on each other to pull out the win."

Mary Star will next play at St. Genevieve on Thursday in a game that could probably push the Stars to the head of the class in the Santa Fe League should they emerge victorious. However, Mary Star is just happy to not have the cloud of league futility hanging over their heads.

"(Ending the league losing streak) definitely gives us a confidence boost," Pisano says. "If we play hard on Thursday, anything is possible."