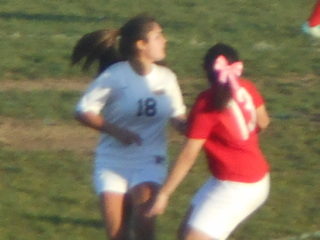 It appears that San Pedro High girls soccer with all its youth, is starting to see their full potential.

It also appears that sophomore forward Ryann Lozano is more than making up for lost playing time as a freshman last season.

The latest witnesses to both facts is Banning of Wilmington, as Lozano's four-goal onslaught powered the host Pirates to a convincing 5-0 Marine League victory, a game San Pedro felt they needed to win considering their first battle with rival Narbonne of Harbor City on Friday is now for sole possession of first place in the league standings.

"We were all very motivated," Lozano said. "This win was something that w all believed we could accomplish and our hard work proved that today."

"This was huge," San Pedro sophomore defender Maddy Luna said. "We came out knowing we were facing a good team but we had our Marine League title to uphold. That's what we did."

Lozano scored her first three goals during a sterling first half, staking San Pedro to a 3-0 lead, and added a fourth late in the second half. Sophomore midfielder Sydney Engel assisted on Lozano's second goal, and on her third goal, she struck in a one-timer shot off a perfect cross pass feed from junior forward Heather Carlton. Lozano's first and fourth goals were both unassisted shots that sailed over the head of the Banning goalie.

"It was a great feeling, but I could not have done it without the assists of Sydney and Heather," Lozano said. "I am really happy that we pulled off another win."

Banning only managed one shot on goal the entire game, as San Pedro freshman goalies Carlene Luna and Kiriana Teofilo teamed up for the shutout and were hardly challenged, but that will change on Friday as they visit Narbonne, who like San Pedro is undefeated in league thus far. San Pedro won both meetings last season en route to claiming a ninth consecutive Marine League crown.

"We can't go into Narbonne overconfident," Maddy Luna says. "We need to play our game and work together as a unit to earn a victory up there."