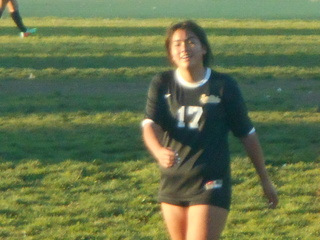 HARBOR CITY - When San Pedro High junior defender Gabriella Ma was called for a foul in the final seconds leading to a free kick, the Pirates held their collective breath.

In the final eleven minutes, Narbonne of Harbor City and senior midfielder Melissa Diaz had three chances to tie up their first Marine League duel in which sole possession of first place was literally up for grabs. The type of game San Pedro normally thrives in under these kinds of circumstances.

The will of the Pirates was tested and tried, but not torn to shreds as Diaz's free kick sailed wide right, then the final whistle blew, and visiting San Pedro escaped with a 1-0 victory over the Gauchos to maintain their high perch atop the league standings. All it took was an early goal by sophomore forward Maddie Villela in the fifth minute, and a crucial save by freshman goalie Carlene Luna, to keep the Pirates afloat.

"Every year Narbonne continues to give us a run for our money," Ma said. "I cannot ask for a better team to compete against."

Still, San Pedro (12-6-3 overall, 4-0 in league) almost didn't come away with an outright win once Diaz was fouled hard by Ma near the box.

"When I saw that the ref blew the whistle and pointed downward, my heart dropped," San Pedro junior defender Lauren Antonelos said. "But I realized what I had to do to back up Carly (Carlene), so Maddie and I got in the wall. As (Diaz) shot it, I knew that if anything went directly towards Carly, she would get it. Thankfully the shot missed and you could feel the relief as the ref blew the final whistle."

Sophomore defender Maddy Luna blasted a free kick towards the net, it landed inside the box and sophomore forward Ryann Lozano headed the ball towards Villela. As Narbonne junior goalie Nitza Castillo lunged towards her, Villela poked it into the net for the goal.

"That was an extremely crucial goal for us," Carlene Luna said. "It built momentum and gave us the edge going into the second half."

Neither team wouldn't provide much scoring chances through the duration of the first half except for Narbonne senior striker Cassandra Reyes' point blank chance snuffed out by both Ma and freshman midfielder Mia Leccese with Luna out of position in the 26th minute, and in the second half, San Pedro was dangerously close to putting the game away when junior midfielder Rianni Gonzales' shot just missed in the 61st minute.

Then Narbonne (7-4-1, 3-1) got a free kick chance in the 69th minute after a foul by San Pedro sophomore midfielder Sydney Engel. Diaz missed wide left, and San Pedro dodged a bullet. Two minutes later on a San Pedro corner kick opportunity, Lozano blasted a shot off the top of the center goal. Then once the 76th minute approached, Ma whiffed at trying to clear the ball, leaving Luna one-on-one with Diaz.

Diaz went to her left with the shot, and Luna made a spectacular diving save to keep San Pedro ahead.

"Just stay on my toes and be ready for anything," Luna said on what was going in her head before making the save. "I relied on my reactions to make the save at the end. I was just happy to get my fingertips to the ball."

Ma was also relieved as much as Luna was when she made the game-saving play.

"I remember just missing the ball and turning around to see the ball in Carlee's hands," Ma said. "It was a great feeling."

Even with that, San Pedro was still not out of the woods yet, but they held on for the win after Diaz's final shot would not reach the nets. The Pirates and Gauchos will once again hook it up on February 9 at San Pedro where the outright league title will more than likely be at stake once again between these two.

"Every time we play Narbonne, they always bring their best," Villela said. "We just need to stick to our game plan and play like we always do."