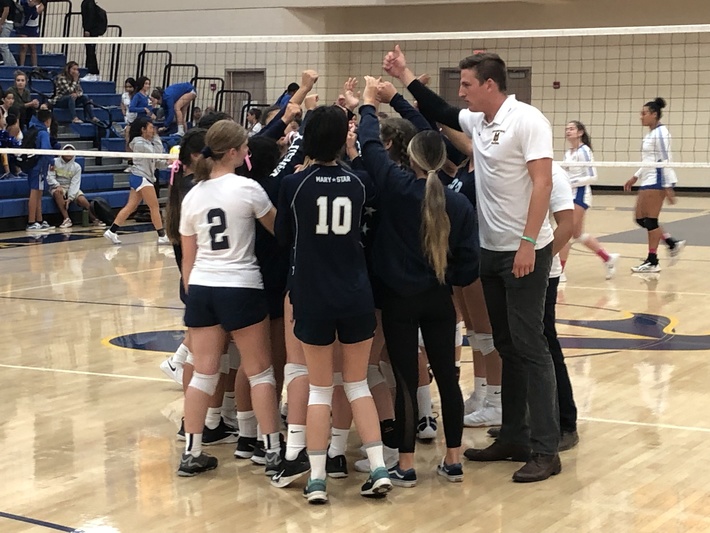 Coming into this Camino Real League first place showdown at Bishop Amat of La Puente, Mary Star High girls volleyball knew their incredible start to the 2019 season would be all for naught if they couldn't take down the Lancers in their first of two meetings on Tuesday, especially with early claim to owning first place on the line.

This was a match the Stars wanted to win the most during the regular season because they knew if they did, it would be very tough to come back from in the case of the defending league champions. It was all or nothing it seemed for Mary Star, and they got it all in the form of a 15-25, 25-22, 25-23, 25-11 victory that increased their indescribable beginning where they have now won 26 out of their first 29 matches.

Early on, it looked like Bishop Amat (5-6, 3-1) would continue their league dominance as they took advantage of a shaky start by Mary Star (26-3, 4-0) for the opening set victory, and they carried on that momentum to a 12-7 lead to open off the second set, but the Stars' guts and true grit would come out, and slowly but surely, the Lancers would feel the effects.

Storming back to tie the match at 16-16, a sudden ace down the right corner line by senior outside hitter Marina Erosa would force Bishop Amat to call timeout, and put Mary Star ahead to stay for the remainder of the set, which talented junior outside hitter would emphatically close with three kills in the last four rallies.

Once again, the Lancers regrouped and took a 20-13 lead in the third set, yet the Stars never wavered and once the score was 20-16, a killer block at the net by Mary Star junior outside hitter Mya Johnson, a Carson transfer, would shift the momentum dramatically, and once again it was Sabra who would seize control with two straight service aces to knot the score at 20-all. Two attack errors would put the Stars in front, but the Lancers would tie it at 23. Another attack error followed by a tip kill from Sabra would give the Stars the important two victories to one edge.

Mary Star's resourcefulness would give way to Bishop Amat carelessness in the early stages of the fourth set, as Sabra bewildered the Lancers with two more aces, staking the Stars to an early 7-2 lead. Senior back row specialist Mia Scognamillo would then blast a perfect ace to jump start another scoring burst, which had Mary Star leading comfortably at 16-6. During that surge, the Lancers committed three attack errors in a row, plus a double contact violation.

Erosa and sophomore middle blocker Marlena Rivera each added an ace in the latter stages of the decisive fourth set, and the Lancers wouldn't get any closer than 18-9 the rest of the way.

A final ace from Erosa would put the exclamation point on what is no doubt the biggest victory for Mary Star thus far, adding on to winning the Artesia Tournament in early September, along with stellar nonleague wins over Rolling Hills Prep, St. Genevieve, Whitney and of course, defending CIF-Los Angeles City Section Division 1 champion San Pedro.

Sabra was unrelenting for Mary Star when it mattered most, as she finished with a team-high 13 kills, 14 digs and five aces. Erosa was amazing as well, with eight kills, 13 digs, 3 aces and two blocks. Arizona verbal commit Serena Ramirez finished with 11 kills, 8 digs and an ace, Johnson had three kills and that pivotal third set block, plus Rivera ended up with six kills and two blocks.

Not to be left out was outstanding play from the likes of senior back row specialists Scognamillo, Sierra Salas and libero Julia Magrini, as their stellar plays kept rallies alive, as were the combined efforts of sophomore setter Ashley Reyes (a critical dump down kill to set up set point in the third set), and junior setter Lily Ruggiero.

This truly was a team win for the Stars, who will host Bishop Amat in the rematch where the league title will likely be at stake on October 15.