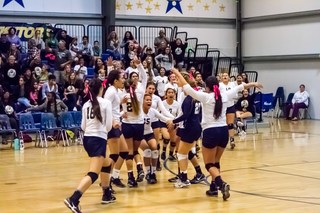 It's been like a renaissance season for Mary Star High girls volleyball.

When you go through a season virtually unchallenged in the Santa Fe League with all ten matches ending in victory by a three-game sweep, claiming both championships in the league for a third straight year, and even in your own city by sweeping Port Of Los Angeles while knocking off San Pedro in four sets, you'd expect to have some high expectations in the playoffs right?

That certainly is the case for the Stars, as this special group with nine seniors who have played together for two years or more, was awarded the fourth seed of the CIF-Southern Section Division 8 playoffs.

Behind third-year coach Tyler Jaynes, Mary Star (16-5 overall) will host Santa Clara of Oxnard on Tuesday at 7 pm in their quest to capture their, and the school's first CIF championship in any sport. Mary Star has only been in just a select handful of championship encounters since the school was established in 1954, but have yet to win a CIF title, last coming close in 2013 when the softball team fell short against Bell-Jeff of Burbank.

There's no doubt that senior outside hitter Ally Spillane has been the main catalyst during Mary Star's current 11-game winning streak where they have only dropped one set, but this full team of Stars has been nothing short of magnificent.

The last time Mary Star tasted defeat was September 20, when the Stars had a chance to sweep Gladstone of Covina tied at 23-23 with Pisano serving, but Pisano's serve went into the net, and Gladstone would emerge victorious nearly a half hour later with a five-set victory on the road.

Ironically enough, Gladstone (23-3) is the overall top seed of the CIF-SS Division 8 playoffs and if all goes well, Mary Star may get another shot at them in the semifinals on November 8.

Regardless of how the season may end, it has been a magical season for Mary Star, who will stop at nothing in attempt to make history for themselves, and the school.