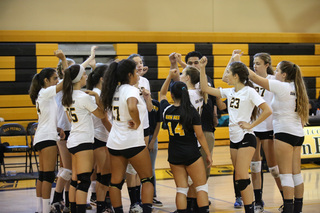 The San Pedro High girls volleyball team, after posting an 18-9 overall record and ending the 2016 season with a rousing five-set victory at Narbonne last Monday for the first road win over the Gauchos in seven years, was rewarded with their first CIF-Los Angeles City Section Division 1 playoff match at home since 2009,

Behind third-year coach Chris Ceballos, the Pirates have continued their upward climb with a youthful, talented lineup as they will open the CIF-LACS Division 1 playoffs on Tuesday as the sixth seed, against No.11 Arleta (14-11-1) on Tuesday at 7 pm. San Pedro finished as the runner-up of the Marine League at 10-2, only losing twice to champion Carson, who got the overall No.2 seed of the Open Division.

In Division 1, top-seeded Venice and second-seeded Sylmar both earned first-round byes in the 14-team tournament.

Freshmen Maya Courtney and Georgie Smith have also came along as of late for the Pirates, for if they succeed against Arleta, will face either No.3 Cleveland or No.14 Monroe on Thursday in the quarterfinals.

Meanwhile in Division 4, Port of Los Angeles is the ninth seed and will go to No.8 Los Angeles International Charter on Tuesday at 7 pm.

The Polar Bears (10-15 overall) placed third in the Crosstown League at 8-4, and is coming off last Monday's heartbreaking five-set loss to two-time league champion Foshay Learning Center at Peck Park, but will try to make noise in the opening round behind third-year coach Rowel Ramirez. POLA will rely heavily upon junior outside hitter Areelle Navarro, junior setter/libero Sachi Verner, senior outside hitter Mariam Moreno and senior middle blocker Dominique Wade.

If POLA prevails, they will face top-seeded Chavez or No.16 Annenberg on Thursday in the quarterfinals.

To download all the brackets for each division of the playoffs, you can find them here at...