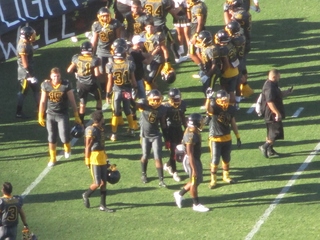 LOS ANGELES - Getting new alternate charcoal jerseys may have looked good on the outside for San Pedro High football but...

There was a lot of fire on the inside of the bellies of the Pirates as they took on Harbor Area neighbor Banning of Wilmington in the 80th Battle Of The Harbor with a lot at stake in this Marine League game that took place at of all spots, the home of the Los Angeles Rams and USC Trojans.

A dominating first quarter surge was just enough for San Pedro to prevail, 20-7 over previously undefeated Banning to remain undefeated in league play Saturday at the Los Angeles Memorial Coliseum.

Unleashing their brand of retribution from last year's 10-9 loss, the Pirates made a huge statement in the second of two games at the Los Angeles Unified School District's 2nd Annual Coliseum Gridiron Classic, that they're still a force to reckon with in Division 1 of the CIF-Los Angeles City Section, all the while regaining Harbor Area bragging rights, AND the all-time series lead at 39-38-3.

Then the defense, most specifically, San Pedro's Gafa brothers stamped their first big imprint on the game.

First, it was senior linebacker Sohl Gafa coming up to sack Banning senior quarterback Myles Porter on the Pilots' first play from scrimmage, and then on third-and-long, it would be sophomore linebacker Junior Gafa spying Porter before picking off his pass over the middle and returning it to the seven-yard line for the first critical momentum boost of the afternoon.

San Pedro would stick to its vintage 'Pound & Ground' assault with junior running back Kai Kaneshiro's two-yard touchdown run with 4:43 left in the first quarter, which came after Jackson's 2-yard run on a fourth & short play aided by a Banning offsides penalty when San Pedro lined up for a field goal. Suddenly, the defense forced a three-and-out and Banning's first punt, and then Jackson's 33-yard pass to Geha set up a 23-yard field goal from senior kicker Tanner Carcamo.

It was a 17-0 lead for the Pirates after one quarter, and they didn't let up defensively, as Banning didn't get a first down until midway through the second quarter. Sophomore defensive end Jay Johnson would sack Porter to end a promising drive, forcing a punt.

Jackson would drive San Pedro to Banning's 17-yard line, but a tipped pass was intercepted by the Pilots' senior free safety David Fernandez. Four plays later, Sohl Gafa would recover a fumble from Banning senior running back Joel Villareal, which set up Carcamo's electrifying 49-yard field goal at the end of the first half, giving San Pedro a commanding 20-0 halftime lead.

Banning finally broke out on the fifth play of the third quarter's opening possession...as Villareal bounced off a San Pedro defender before sprinting to paydirt for a 42-yard touchdown run, cutting their deficit to 20-7 with 9:47 to play in the quarter.

After that touchdown, the defenses of both schools tightened up more and neither would be heard from on the scoreboard again.

In the fourth quarter, Banning appeared to have new life when they recovered a fumble from Sohl Gafa with over four minutes to play in the game, but the Pirates' defense would make one final stand, forcing a turnover on downs, before running out the clock to earn a huge victory.

The overall play of Jackson at quarterback was crucial for San Pedro, as he completed 9-of-17 passes for 134 yards while also rushing for 62 yards on 11 carries. Kaneshiro ran for 53 yards on 16 carries, and junior running back Sean Davenport added 42 yards on 12 carries. Geha caught six passes for 89 yards and a touchdown for the Pirates, while Banning was paced by Villareal's 103 yards on 15 carries and a touchdown.

Next up for the Pirates? It's two-time defending CIF-LACS & State Division 1 champion Narbonne of Harbor City on Friday at El Camino College. The Gauchos (8-0, 3-0), ranked fifth in the state, dusted off Washington Prep of Los Angeles, 49-8 this past Friday.