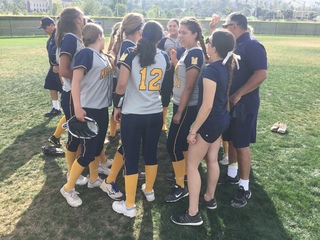 RIVERSIDE - No one could have ever imagined this could ever be possible.

Mary Star High softball made it a reality.

Carnegie-Schools of Riverside had everything in place on Tuesday for a possible trip to a CIF-Southern Section Division 6 championship game. Home field advantage at La Sierra University, a perfect 27-0 record, and a state record 479 runs scored this season alone, including 39 home runs. It would take a truly special team embarking on their own wonderful season to knock off the Wolverines.

A fifth inning surge was what did the trick for Mary Star, combined with yet another magnificent outing in the circle from sophomore pitcher Ale Samperio, and the upset was complete.

The Stars won 5-2 over top-seeded Carnegie in the CIF-SS Division 6 semifinals, booking the Stars a spot in the finals on Friday, 12:30 pm against Highland of Palmdale at Deanna Manning Stadium (Bill Barber Park) in Irvine. This is Mary Star's second CIF-SS championship game appearance in six years and will try to do what no other sports team has done in the 64-year history of the school, capture a CIF-SS championship.

True to form, Carnegie (27-1) scored two runs off Samperio in the bottom of the third inning, but the Camino Real League champion Stars (21-7 overall) remained undaunted and maintained their belief in themselves. Sure enough, Mary Star would get their break in the fifth inning as they have had during their entire playoff run.

Now with their biggest chance to score right in front of them, Mary Star was not going to let it slip away.

Sophomore shortstop Ashley Rico would hit a high pop up that somehow dropped in front of center field, plating Bautista to cut Carnegie's lead in half. Sophomore catcher Sofia Amalfitano followed with a deep shot to right field for a sacrifice fly to score Buscemi and even the score at 2-2.

Amalfitano made sure the third time was the charm, and put the game on her arms by belting a towering double over the center fielder's head, scoring Marquez, Rico and courtesy runner Ari Corralejo to put Mary Star in the lead for good.

That was all Samperio needed from there, as she only allowed one hit in retiring nine of the final ten batters she faced to finish on a three-hitter, allowing two unearned runs with a walk, striking out 13 batters to seal up the Stars' twelfth consecutive victory.

In all, Mary Star just had six hits in the game, but they were more than enough to give them one more shot at history.