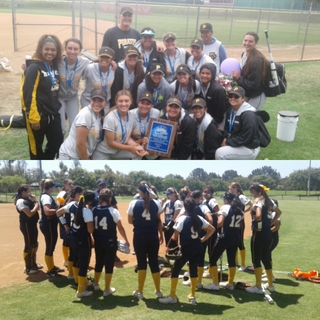 Friday, June 1 ended a special season of San Pedro Prep Softball, and two of the three schools in particular ended their respective years in a CIF championship game, but were unable to bring home a title.

San Pedro High softball was not expected to repeat their heroics of 2017, but they definitely made a run of it in the brand-new CIF-Los Angeles City Section Open Division playoffs, knocking off top-seeded Marine League rival Carson and fourth-seeded Polytechnic of Sun Valley before their marvelous run in attempt to repeat as champion fell short in a 4-1 loss to Chatsworth in the Open Division final on May 19 at Cal State Dominguez Hills in Carson.

Meanwhile, it was more of a Cinderella-like run for Mary Star High softball.

The Camino Real League champions took out fourth-seeded Rancho Mirage of Palm Springs and top-seeded (undefeated at the time) Carnegie Schools of Riverside before a 13-2 loss in the CIF-Southern Section Division 6 final on Friday at Deanna Manning Stadium in Irvine ended their quest to win the school's first CIF sports championship.

San Pedro may have lost both their Marine League and CIF-Los Angeles City Section championships in 2018, but they gained something far more valuable... that was even more respect.
The Pirates could have easily folded their tent and just played out the rest of the season after being deserted early on at the end of the first month of the season, but like a true team, they kept on fighting. Tony Dobra didn’t have to come back to coach them after nearly four years of retirement and he had nothing left to prove, but he was the guiding force and the perfect person to step in when the the Pirates needed someone.
It took them three weeks to gel, but once they did, it was full speed ahead.
Several girls like sophomore outfielder Priscilla Andrade stepped up several notches, freshmen infielders Sierra Sandoval and Jo Jo Krause became impact players, and the veterans like seniors catcher Anessa Quiroz, shortstop Taiya Reyna and pitcher/DH Quincy Greenwood were spectacular. Not to mention there was the 'Power Of The Bri's in sophomore cousins pitcher Briana Velazquez and first baseman Brianna Talamantes taking their respective games to new heights in their sophomore seasons.
San Pedro finished 19-15-1 overall tied for second with Banning of Wilmington in the Marine League.

Mary Star played above and beyond what everyone expected out of them in 2018... including themselves.

Did anyone expect these Stars to be one of 14 schools in the CIF-Southern Section to be playing for a championship at the end of the season as end up as one of two teams out of 92 Division 6 based schools? It was hard to even fathom after a dreary 2016 season.

Two years ago the Stars were stuck in a rebuilding phase and only won five games in 2016, so few if any gave them any chances to get back to where they once were in 2013. The doubters secretly and in some cases publicly written them off the second Camino Real League play begin in 2018, and they came out of it as champions with a near perfect record at 11-1, even defeating a defending CIF champion in St. Anthony of Long Beach three times in league play.

When the Division 6 playoffs began, the Stars were probably hoping to just win their first game, which they did against Carpinteria on May 17. That's when things became real for coach Hector Rivera and his proud group of 19 girls who wanted to take it a step further.

Next, they disposed of a Santa Ana Calvary Chapel team that had beaten the Stars earlier in the year when sophomore outfielder Sarah Leyba, senior third baseman Miranda Marquez and senior outfielder Jillian Duran were unable to play. Right after those two wins, Mary Star took two long road trips to first take down Rancho Mirage of Palm Springs, then would silence all doubters with a massive stunner of an unbeaten Carnegie team that set the state high school record for runs scored in a season.

Outside of the brilliance of sophomore pitcher Ale Samperio who had double digit strikeouts in all five playoff games, either sophomore shortstop Ashley Rico, and either of the two Amalfitano sisters in sophomore catcher Sofia or junior first baseman Rose, would come through with a clutch hit when Mary Star needed it most. None was more bigger than Rose Amalfitano's bases clearing double with two outs in the fifth inning to take down Carnegie.

A bitter final loss two days ago in the finals to Highland does not diminish what Mary Star (21-8 overall) was able to accomplish in 2018, and these Stars never lost their shine.

Both these teams in my mind, are still champions by the way they both fought their way through their seasons.