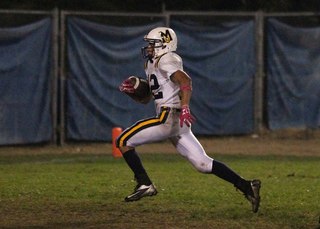 Holding a 15-14 lead after the Vikings scored a touchdown midway through the second quarter, the Stars reeled off 35 unanswered points to roll to a convincing 50-14 victory in a critical Del Rey League war. The running game of Mary Star (3-5 overall, 2-3 league) along with their senior-oriented offensive line would eventually wear down a St. Bernard (4-4, 1-3) team playing its first homecoming game in two years.

While the bruising running of senior running backs Shane Nunez, Jonathan Chacon and others began to take its toll, the Stars would drop the hammer late in the third quarter with senior quarterback Tyler Sestich's 37-yard touchdown pass to sophomore wide receiver Vinny Lauro for a commanding 43-14 edge.

This was a crucial victory for the Stars, as they're jockeying for position in the Del Rey League with the likes of Bishop Montgomery of Torrance, and Cantwell Sacred-Heart of Montebello in the playoff race within the league.

Nunez was a monster for Mary Star, rushing for a career-high 257 yards on 28 carries and four touchdowns. Senior fullback James McDonald and sophomore running back Jarod Alves also added touchdown runs for the Stars, who will host Bosco Tech of Rosemead on Friday for their final league game of the year at Daniels Field.

St. Bernard junior quarterback Stephen Chavez was 24-of-30 passing for 367 yards with an interception.