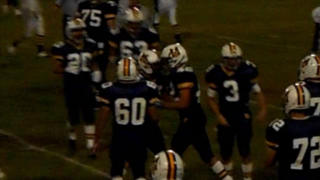 The playoffs appear to be a distant reach away from Mary Star High football, but don't think the Stars are ready to fold up their tent so easily.

Hope is always there, and the host Stars gave their home crowd at Daniels Field just a taste of how their entire season could have been with their best first half of the season against struggling Bosco Tech of Rosemead in their Del Rey League finale.

Mary Star scored on five of their seven first-half possessions, three of the drives only lasting one play, while scoring three long touchdowns of 78 yards or more before cruising to a 40-16 victory over Bosco Tech. It was not only the second victory in a row for the Stars (4-5 overall, 3-3 league), it was a nice statement game for a team that is on the outside looking in for that third place spot in the Del Rey League.

Bishop Montgomery of Torrance soundly defeating St. Bernard of Playa Del Rey, 51-27, puts Mary Star in a quandary as they are now hoping for a Knights loss to Verbum Dei, and a Cantwell Sacred-Heart of Montebello victory over St. Bernard next week to put all three teams (Mary Star included) in a three-way tie for third place.

Mary Star's defense forced a quick three-and-out to start the game, and then senior running back Shane Nunez immediately went to work.

First carry Nunez gets he finds a crease up the left sideline for a 53-yard touchdown run with 11:25 remaining in the first quarter, putting Nunez over the 1,000-yard rushing mark for the season. The two teams traded punts until one critical sequence in at the end of the first quarter turned the tide right back in Mary Star's favor.

A curious call to go for it on fourth-and-one from their own 19-yard line paid off, as senior fullback Jonathan Chacon rumbled three yards for the first down... and on the very next play, senior quarterback Tyler Sestich on a play-action fake hit senior tight end Neven Skoblar with a short pass on the run. Skoblar showed off some speed to get the first down, and then brushed off the last defender with a strong stiff arm before cruising to the end zone for an electrifying 78-yard touchdown as the first quarter time expired, and a 12-0 Stars lead.

The lead would increase to 40-0 to begin the second half as sophomore WR/DB Vinny Lauro bobbled the opening kickoff, but managed to find the ball, pick it up, then race down the middle through a gaping hole for an 85-yard touchdown 14 seconds into the third quarter. The Stars never scored again after that, but the damage was done as the starters got well needed rest for the entire second half.

Bosco Tech (0-9, 0-5) was able to avoid the shutout early in the third quarter, and scored once again in the fourth on a 95-yard fumble return, but were stopped on downs twice, and senior safety Donald Olkie intercepted a pass in the first quarter for Mary Star, who has now scored 90 points in their last two games.

The Stars close out the 2013 season at home against visiting Zavier Prep of Palm Springs in a nonleague game at Daniels Field.