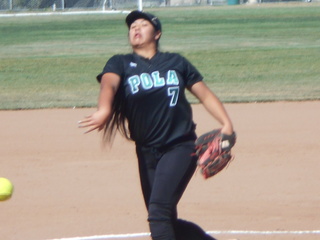 WILMINGTON - It's a brand-new league for Port Of Los Angeles High softball, but it's the same old dominance.

In a battle for sole possession of first place in the Coliseum League, the Polar Bears would defeat host Harbor Teacher Prep of Wilmington, 10-1 at Harbor Sports Complex to continue their amazing run which has one purpose in mind... to get back to a CIF-Los Angeles City Section championship game.

It sure helps when you have a commanding pitcher like the Eastern Michigan-bound senior Nicolle Miranda to take care of things.

Miranda hurled a four-hitter, surrendering one earned run on four walks, a hit batter, and 12 strikeouts, while also hitting a home run, and driving in a second run off a sacrifice fly in the sixth inning to pace the Polar Bears (21-3 overall, 6-0 league), who stymied a Monarchs (9-6, 5-1) team that was coming off an impressive victory over Banning of Wilmington followed by a 42-0 drubbing of Manual Arts of Los Angeles Tuesday.

"My mindset is to always stay focused, hit my spots and do my best for my team because I know they will have my back," said Miranda, who is now 9-0 in her career against Harbor Teacher Prep.

POLA went 12-0 against Harbor Teacher Prep in five years of Crosstown League combat, and even though both moved to the Coliseum League for better competition, nothing has changed in this rivalry.

After a scoreless first inning, Miranda got it going in the top of the second inning by drilling Harbor Teacher Prep sophomore pitcher Carmen Angulo's 1-and-0 offering deep into the right-center field gap for a lead-off solo home run. Sophomore second baseman Destiny Sambrano's RBI-ground out, followed by senior shortstop Savana Ramirez's RBI-single gave the Polar Bears a 3-0 lead later that inning.

Senior Adriana Vargas scored off a throwing error in the third inning for a 4-0 POLA lead, then a sacrifice fly by senior designated player Laura Leos in the top of the fourth inning made the score 5-0, plating senior third baseman Briana Valencia, who led off the fourth with a triple.

"I was pretty nervous, I'm not going to lie," Vargas said on when she came up to the plate in a pressure situation. "But I kept telling myself that I need to hit the ball. "I can't leave people on base."

Miranda was appreciative of Vargas' biggest hit of her four years at POLA.

"I was excited when she hit it," Miranda said. "I knew we would have our inning to finally break through, we just needed to be patient."

Showing off that patience was Valencia, who three pitches later cracked a double to left to drive home Vargas for a 10-0 POLA lead before the Monarchs broke up Miranda's shutout bid with an RBI-single by sophomore catcher Gabriella Fua in the bottom of the sixth.

"We stress on the need to execute in situation hitting," said Valencia, last year's Crosstown League MVP. "That was big for me because I have been struggling but I'm coming around."

POLA recently put up a strong showing in last weekend's Las Vegas Spring Jamboree Tournament, going 5-1 and the loss was in the Gold Division championship game to Cathedral Catholic of San Diego, but they admittedly felt like they didn't bring their best all-around game to the forefront against a young and improved Monarchs team.

"We need to stop playing at our opponent's level," Valencia said. "We tend to play down and make games closer than they should be."

Angulo, who pitched Harbor Teacher Prep to the CIF-LACS Division III championship last year, struck out five but was tagged for nine earned runs off eight hits, three walks, and six hit batters. Next up for the Polar Bears is a Coliseum League road game at Crenshaw of Los Angeles on Monday.