As soon as I got back to my car after getting off the Voyager from Friday afternoon’s whale watching trip, I called Diane with a full report. Great trip. We started out with a pod of Risso’s dolphins, then found the first blue whale less than a mile from the harbor entrance. In all we saw four different blue whales, including one that made a close approach coming closer and closer to the boat until it dove just fifty yards away. And we saw several pods of long-beaked common dolphins all over the place. And a few mola mola.

A few minutes later, Diane called. “There are killer whales a mile off the condos right now,” she said. Wow! As I made my way around the peninsula, Diane kept calling with updates. There were four orcas. They were heading east. The Christopher was staying with them. She couldn’t find anyone with a boat willing to go out. Alisa was seeing the Christopher form the end of Pacific Avenue and was heading to 22nd Street Landing to try and get on a boat. 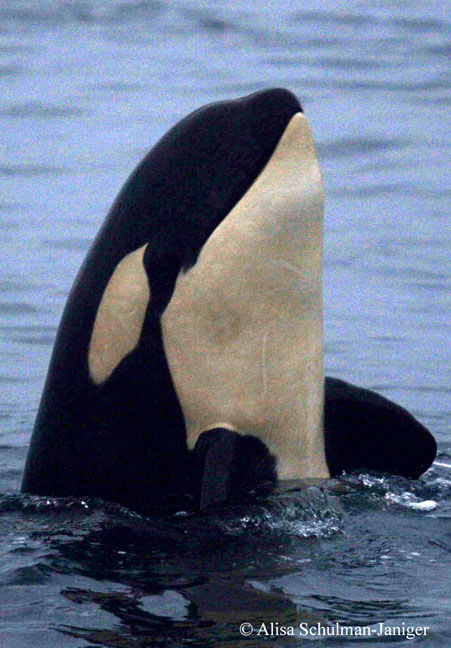 Alisa is Alisa Schulman-Janiger, marine biologist and certified orca nut. She is the director of the Gray Whale Census and Behavior Studyat Point Vicente and one of the co-authors of “Killer Whales of California and Western Mexico: A Catalog of Photo-Identified Individuals.”

When I got to the top of the bluff at the end of Pacific, Alisa was already gone but I could see the Christopher drifting just about a mile from shore. Through my binoculars I could clearly see the orcas milling around the boat. There was one large male in the group. And then a couple of animals breached big, coming completely out of the water. There were more than four orcas, I counted at least six. They kept swimming back and forth but never moved very far away from the Christopher. They splashed, lunged and spyhopped. Sometimes they would be out of sight for up to ten minutes and sometimes they would all be at the surface for quite a while.

Diane arrived soon, then Natalie who brought a scope, then Sandy, then Cathy. Word was getting out. A family arrived who had found out about the sighting on Facebook. I took a glimpse through Natalie’s scope at the right moment to see one orca do a full spyhop right in front of the boat. There were also two blue whales that swam back and forth about a half mile behind the orcas and a large pod of common dolphins that moved around quite a bit but came within a couple of hundred yards from their large cousins several times. We had the three species of cetaceans in the same field of view through our binoculars.

And then we saw a small boat heading for the whales. Never underestimate Alisa when she is on the trail of orcas. She had talked someone into taking her out to document the encounter. This is very important work. Transient killer whales roam the west coast of North America from Alaska to Baja and usually travel well over a hundred miles in a day. We still know very little about them and each time someone is lucky enough to run into these magnificent animals, we have an opportunity to learn more. Where they are when. What they are doing. Who is hanging out with whom.  Every data set is another tiny piece in a giant puzzle.

Alisa identified the whales as CA51 and her family. CA51 had first been photographed in Monterey Bay 20 years ago this month. With CA51 were two sons, one adult and a sprouter (a male killer whales whose dorsal fin is beginning to grow as he is about to reach sexual maturity), one calf and her 18-year-old daughter who has two offspring of her own, including a calf that is less than a year old. This group is seen in Southern California quite often and was in Monterey Bay just last week.

Transient orcas feed on marine mammals and in this case there was a young California Sea lion that kept hiding under the boats apparently having been chased by the whales. This is typical behavior; the adults will contain a small animal like that and give the calves an opportunity to learn how to hunt. The Christopher returned to the dock after Alisa arrived and she stayed until it was pitch black and she couldn’t see her hand in front of her face, much less the orcas. By the time Alisa left, the sea lion was still alive. It is possible that the orcas let it go after the lesson was over.

You can contribute to the efforts of scientists to learn more about these apex predators. Alisa would love to hear from you if you are seeing orcas anywhere in the wild. And she would love to talk to you if you have seen them. She can use information like where, how many, what they were doing, where they came from, where they were going and she especially likes to see video footage and photos. She can identify every individual animal from a clear photo that shows that dorsal fin and the saddle patch, a gray patch just behind the dorsal fin that resembles a swoosh.  You can contact Alisa Schulman-Janiger at janiger@cox.net or call (310) 519-8963. Keep your eyes open, orcas like to show up without warning and then they disappear like a mirage.

As I am getting ready to post this, word is spreading on Facebook that a pod of orcas is being seen off Dana Point midday Sunday. Could be the same group, could be others, but it is incredibly exciting.