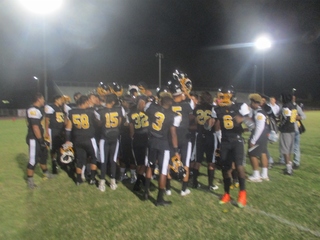 And the 2017 high school football season officially begins... in a flash.

Taking a 7-0 lead after one quarter into the second stanza, the Pirates would score 35 points to completely break the game wide open, as senior running back Sean Davenport ran for touchdowns of 9 and 17 yards to put the Pirates ahead 21-0 with 7:54 to play. South East senior quarterback Edward Norton would put the Jaguars on the board with a nifty 26-yard touchdown scramble to cut the Pirates' lead to 7-6 with 5:41 remaining before halftime.

Norton's score seemed to light a fire within San Pedro, as they would proceed to close the first half with 21 unanswered points, with a pair of defensive takeaways mixed in between.

First, sophomore quarterback Joshua Ward would rush for an 18-yard touchdown, then Davenport forced a fumble which was recovered by senior defensive end Nick Sezate. San Pedro junior quarterback Justin Bernal would then throw a swing pass to sophomore running back Giovanni Rizzo for a 20-yard touchdown pass with just three minutes left.

Senior defensive back DeVean Randall would pick off Norton's pass to end a promising South East drive and returned it 49 yards to the Jaguars' 33-yard line... still there were eight seconds remaining.

Bernal would immediately fire a dart over the middle to senior wide receiver Corey Fausto for a 33-yard touchdown on the final play of the second quarter (literally one second was showing on the clock) to cap off San Pedro's dominant second quarter, and a 42-6 halftime advantage.

The Jaguars wouldn't go away quietly as Norton ran for a five-yard touchdown and tossed in a two-point conversion pass late in the third quarter for the final scoring tally as the entire second half was played with a running clock.

Davenport, who only carried the ball eight times, ran for 95 yards and three touchdowns, which included his first one, a four-yard burst up the middle with three minutes left in the first quarter. Bernal only threw six passes, but completed three of them for 62 yards and a pair of scores with no interceptions. Norton led South East with 135 yards rushing on 20 carries, but was intercepted twice by Randall and senior defensive back Cam Batiste on the game's opening series.

San Pedro will try to build off their opening success with a nonleague battle against Grant of Van Nuys on Thursday at San Pedro High.