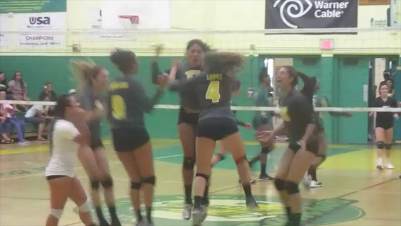 HARBOR CITY - The attacks came at them hard, but San Pedro High girls volleyball attacked harder when it was all said and done.

Down two games to one, the visiting Pirates took everything Narbonne of Harbor City dished at them, and dished their own brand of heart, guts, resilience and a whole lot of firepower in a crucial 22-25, 25-16, 18-25, 25-20, 15-13 Marine League victory that was more than inspiring.

It was the undeniable will to win, and the never say die attitude that was crucial to the success of San Pedro (9-8 overall, 4-1 league), who has now won in five sets over Narbonne at least once for three straight seasons. the last two coming on the road.

"Going into that fourth set with one win left us with two options: go all out or go home," San Pedro junior outside hitter Lauren Sutrin said. "There was no more time to feel out Narbonne or waste points on stupid mistakes. We had to bring it from that point on."

That's exactly what the Pirates would do against the hard-hitting Gauchos (6-5, 4-2).

It wasn't just Sutrin who brought it, San Pedro came at Narbonne in waves with several contributors in just about every facet of the match.

After Narbonne won the opening set, it was the serves of sophomore setter Rosie Lopez that aided San Pedro in the midway stages of the second set, as she came up with three straight aces. Freshman outside hitter Serena Ramirez was also pivotal down the stretch as Sutrin's booming kill off a double block ended the set. The Gauchos would win the third set going away, but the Pirates countered with a vicious block from senior middle blocker Rebecca Alvarenga to force the deciding fifth set.

Selene's booming kill got things started in the fifth set which came after a clutch dig from Peterson right after a blocked attack as the two teams traded side-outs until a roll shot from senior outside hitter Leinea Mueller would drop down for a kill and a 5-3 San Pedro advantage that would suddenly balloon up to 9-4 after a sneaky dump down kill from senior setter Kiriana Teofilo forced a Narbonne timeout. Peterson and Sutrin each drove home authoritative kills before Teofilo's heads-up play.

Digs from junior defensive specialist Hanna Gurrola and senior libero Alison Lyons kept rallies alive all throughout that fifth set for San Pedro, but somehow Narbonne would even the score at 10 after two stuff blocks out of their last three points during their 6-1 rally. Back-to-back kills from Peterson and Selene Ramirez, followed by an ace from Lopez gave San Pedro a 13-10 edge, and Narbonne used their last timeout before cutting the deficit down to 13-12. Peterson blasted her third kill of the set to force match point, then the Gauchos got a reprieve with Peterson's service error.

A thrilling final rally ensued that ended with a block by San Pedro junior setter Sosha Williams, which was upped by Narbonne and went out of play, causing a wild celebration from the Pirates.

"Our comeback from being down was incredible," said Peterson, who along with Serena Ramirez each contributed ten kills and ten digs. "We came together as a team and pushed each other to do better, and by doing that it helped us to not only make ourselves better, but make our bond as a team stronger."

Selene Ramirez led San Pedro with a team-high 17 kills, while Lopez contributed greatly with 25 assists, 11 digs and four aces. Lyons added a match-high 25 digs for San Pedro, who got nine blocks at the net as a team, led by Sutrin who had three blocks to go with her four kills and an ace.

"Blocking was a key aspect in getting the win for the entire match," Sutrin said of Williams' match-ending block. "And the fact that Sosha went out there and finished it exactly how we were hoping to start is just another example of our team's strength and resilience."

Sutrin couldn't have said that any better.