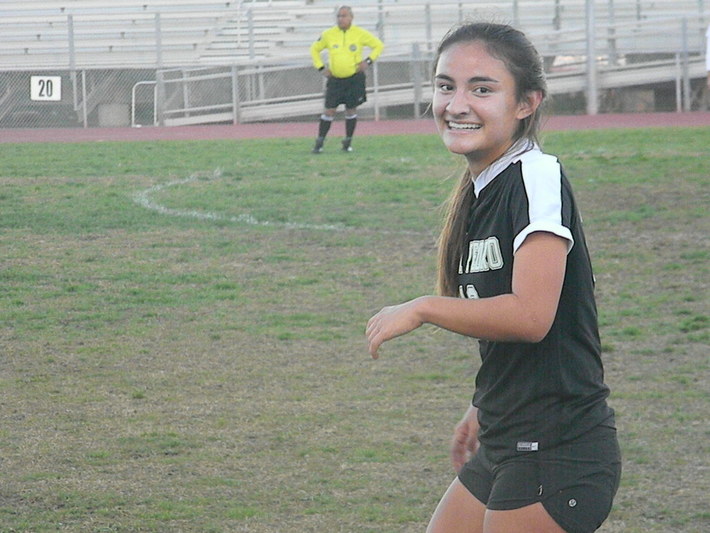 What happened on Wednesday afternoon was yet another sequel of what has been a recurring theme for the San Pedro High girls soccer program.

In a highly anticipated and extremely intense Marine League showdown with longtime adversary Narbonne of Harbor City, the Pirates would dictate the tempo to their liking and overcame a fierce challenge yet again from the Gauchos and won 5-0 at Mike Walsh Pirate Stadium, reminding everyone who forgot why San Pedro has owned the league for a decade plus.

The first half was controlled by the Pirates (8-2-1 overall, 2-0 league) as they were able to get a pair of goals for a 2-0 halftime lead.

Sophomore midfielder Karina Martinez would get a great pass just outside the box from senior Reyna Salas before booting in a shot from close range in the 17th minute, then just nine minutes later, the other Martinez sister, senior All-City returning forward Samantha Martinez would loft in a perfect long range throw-in from the left sideline near the net to two Pirates, including her sister Karina, but it was All-City returning junior midfielder Renee Ketner who would head it in for the 2-0 advantage.

In the 48th minute of the contest, Karina Martinez would score a second goal by heading in another long throw from Samantha Martinez to push the Pirates ahead 3-0, and from that point on, the atmosphere would get a little chaotic as Narbonne (3-8-1, 1-1) tried to mentally take San Pedro out of their game by increasing their aggressiveness. The game would get out of control emotionally as a whopping nine combined yellow cards were issued.

Shockingly enough, no one was ejected.

Narbonne's best chance to score in the 59th minute on a free kick attempt from junior Jassmin Ortiz-Martinez was snuffed out by a low save from San Pedro junior goalie Katelyn Viducic, who saved three shots in the second half to combine with fellow junior Dominique Saxey for the shutout.

From that point on, San Pedro was fed up with the intimidating tactics from last year's CIF-Los Angeles City Section Division 2 champions, and would respond by scoring two more times.

After a slick hesitation move to drop a Narbonne defender to her knees, Ketner would score again in the 65th minute and then just five minutes after that, sophomore midfielder Kylie Danelo would chase down a long cross pass attempt from fellow sophomore midfielder Brianna Johnson, a Westchester transfer, then make a shot from across her left side that the goalie deflected off the top-left side of the goal but the ball still ricocheted to the right end of the net and in.

Danelo's goal would cap off another big win for the Pirates who have now won seven straight games after a 1-0 loss at Redondo Union on December 5, a streak likely to continue on Friday as they will next face Marine League newcomer Rancho Dominguez Prep on the road at 4 pm.