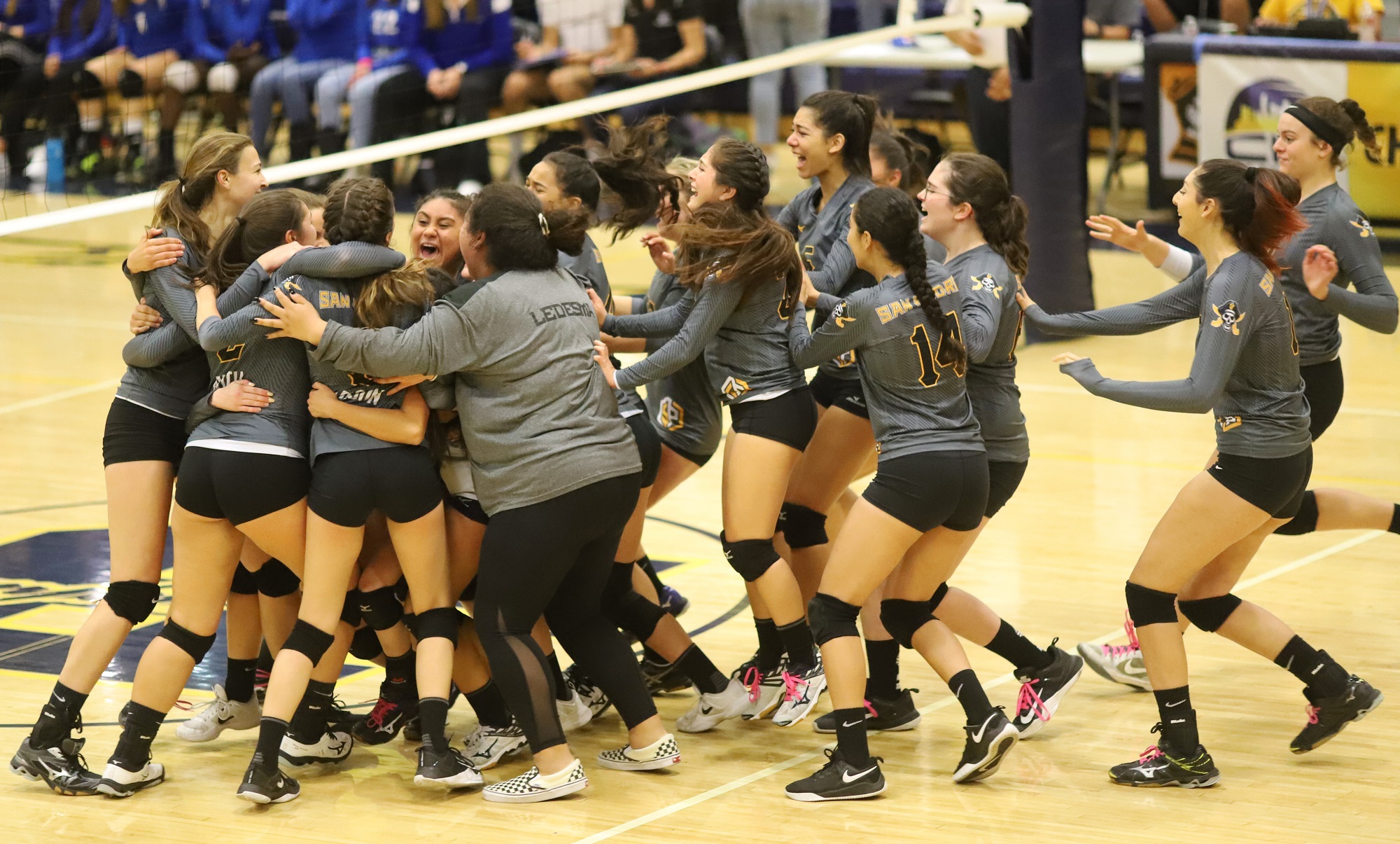 In 2017, the San Pedro Prep Sports world saw two teams win a CIF championship. The year 2018 would double that total with four CIF champions, one of which being a historic first, with two more to close the year coming in 21 days during the month of November.

There would also be ten on-campus signing day ceremonies combined with a couple more on the side.

League dominance would continue yet again for another team and there would also be two more CIF championship game appearances in the same sport during a 13-day span.

All in all, 2018 was a special year indeed, and here are the top stories.

The month of November was extremely good to San Pedro High School sports, as on November 3, the girls volleyball team would conquer all their doubts, and win a four-set war with El Camino Real of Woodland Hills to capture their fourth CIF-Los Angeles City Section championship. Strong performances from Sara Peterson, Lauren Sutrin, Alexis Avitia, Hanna Gurrola and Isabella Emerson would do the trick. San Pedro would finish 26-6 overall after their second straight berth in the CIF Southern California Regional would end in the opening round of Division 4 in a four-set loss to Beaumont.

And then on November 24, the football team capped off an unlikely run to another CIF-LACS Division 1 title as the Pirates would outlast Dorsey, 22-20 at El Camino College to win their first CIF title in more than a decade, and sixth overall.

An outstanding two-way effort from junior RB/LB Joshua Ward combined with stellar team play all across the board helped San Pedro shake off a rugged regular season. Senior WR/DB Cam Thomas would sign with Idaho on December 19.

Even though the girls volleyball and football team closed out 2018 in glorious fashion, it all got started with the boys soccer team's return to greatness as they would win the CIF-LACS Division 4 title over University on March 3 at Los Angeles Valley College.

It was by far, the toughest playoff run of any San Pedro Prep Sports Team in 2018, as the Pirates were awarded the top-seed but had to win a pair of 2-1 decisions in the second round and quarterfinals (first round bye), hold off North Hollywood via a penalty kick shootout after the semifinal game ended in a 2-2 draw, and finally another shootout win over University in the final after both teams traded overtime goals when the game ended scoreless in regulation.

Senior goalie Kevin Hernandez made the biggest impact of the entire shootout in the CIF-LACS Division 4 final, making the second of five straight shootout kicks the Pirates made, then following it up by stopping the Wildcats' next shot for San Pedro to preserve the 2-1 edge.

In what was the best run of any Mary Star team in 2018, the softball team would throw a monkey wrench into a lot of opposing schools plans as they would reach their first CIF-Southern Section Division 6 championship game since the 2013 team.

Unlike that team, the Stars didn't need a second chance to earn their way into the final, and during their entire playoff run, the fifth inning was their magic moment.

In the first round against Carpenteria, the Stars scored all five of their runs in a 5-0 victory. Then in the second round against Santa Ana Calvary Chapel, a timely RBI-single from Ashley Rico which followed a double from Sarah Leyba gave the Stars a crucial insurance run for a 3-1 victory. Then in back-to-back road wins at both Rancho Mirage and Carnegie Schools of Riverside, Mary Star would score five runs in the top of the fifth inning twice more to outlast Rancho Mirage, 7-6 in the quarterfinals, and upset top seed and previously unbeaten Carnegie Schools, 5-2 at La Sierra University in the semifinals.

The magical run finally ended with a 13-2 loss to Highland in the CIF-SS Division 6 title game on June 1, but Mary Star made it one heck of a run. Rico and ace pitcher Alessandra Samperio were named as All-CIF Division 6 selections.

4. The Return Of A Legend Opens Up New Possibilities For San Pedro Softball

Year No.44 of San Pedro softball provided one of the strangest mid-season changes, and it almost ended with a familiar result.

Once the Las Vegas Spring Jamboree was finally over during spring break, the Pirates brought back the legendary coach Tony Dobra out of retirement for just two months, and although the process was slow to begin, San Pedro picked up really quickly by the end of April, and made their usual run of May a memorable one.

A dramatic walk-off grand slam home run from Briana Velazquez to defeat Banning on May 2 in the Marine League regular season finale would put San Pedro on an incredible ride, which would then follow with a first round upset win over top-seeded Carson in the inaugural CIF-LACS Open Division quarterfinals, and then a gutsy 8-4 semifinal road win at Polytechnic of Sun Valley in which the Pirates scored six big runs in the fourth inning to break the game open put the Pirates back in their customary role of being one of two teams in a CIF final.

The ride came to a halt on May 19 as Chatsworth prevented a repeat CIF championship with a 4-1 win for the CIF-LACS Open Division title, but the Pirates still embraced their runner-up year like a championship year. Velazquez, Anessa Quiroz and Taiya Reyna were named as All-City Open Division selections.

5. The Eighth CIF Championship In POLA High School History Is Of Good Cheer

For those of you who may not be aware, cheerleading is a sport.

In the first year of competitive cheerleading in the CIF-Los Angeles City Section, it turned out to be a memorable year for the newly sanctioned sport. The inaugural year would come to an end for the CIF-LACS on May 12 at Birmingham Community Charter High School, as Port Of Los Angeles High would capture the first championship out of all four divisions, when it blew past everyone with a spirited performance for the Division 4 championship.

The other three championships were all from the San Fernando Valley in Birmingham (Division 1), Taft (Division 2) and Valley Academy Of Arts & Sciences.

San Pedro finished fourth place in the Division 3 competition for cheer, but it finished just six points out of first place.

6. Basketball Is Rising High At The Star Of The Sea

2018 was arguably the best tandem year for basketball at Mary Star High, as both the boys and girls teams made strong progress, especially in the postseason.

The boys team was well balanced even though most of the focus was centered around star (no pun intended) guard Joseph Octave. Third-year coach Mike Sestich got great efforts in many ways from the likes of Jose Rocha, Aaron Martinez, Adrian Alvarez, Dedrick Allen, DeAndrew Lopez and Trevor Tschaepe all the way to capturing a share of their first league championship since 2006, a tri-Santa Fe League championship with St. Paul and Salesian.

The Mary Star boys basketball team finished 24-6 overall before falling in the CIF-SS Division 4-A quarterfinals at home to Carnegie Schools of Riverside.

Not to be outdone, the girls team under fifth-year coach Victor Tuberosi far exceeded all expectations as they would finish 19-9 overall and Santa Fe League runner-up before losing in the CIF-SS Division 5-AA semifinals to eventual champion Grace Brethren of Simi Valley.

At this point, winning the Marine League championship is the birthright of San Pedro girls soccer, as since the league was formed in 2000, the Pirates have now won 13 straight league crowns, and 17 out of those 18 years since, yet the Pirates have not been able to parlay any of that success into a CIF championship.

After another league title run in which San Pedro won all ten league games by shutout, the Pirates would follow it up with close playoff victories against South Gate and then-defending champion Granada Hills before a hard luck 2-1 overtime loss at eventual champion El Camino Real ended their title dreams.

Still, Samantha Martinez had a phenomenal year with 28 goals in being named to the All-City Division 1 team alongside Renee Ketner, who scored 17 goals, including the game-winner at Granada Hills with three minutes left.

8. The League Win Streak Ends, But The League Title Streak Lives On For POLA Softball

The most hardened team of 2018 was no doubt Port Of Los Angeles softball.

It was the first year without an Espinoza coaching the program, and the first year where the Polar Bears did not have a Division 1 caliber pitcher to lead the way. Not only that, the schedule was a lot shorter, and the other teams in the Coliseum League were a lot hungrier to put an end to POLA's monopoly of the league championship.

In early April, the Polar Bears lost a 13-inning game at King-Drew Medical of Los Angeles which effectively ended an 84-game unbeaten league winning streak, and then two weeks later, POLA also lost another league game at home to View Park, the eventual CIF-LACS Division 2 (and three-time) champions, for only their second loss ever at Leland Park.

Towards the end of the year, the Polar Bears would get their revenge on King-Drew with an 11-inning victory at Leland Park due to a dramatic walk-off RBI-single from Allison Torstensen to salvage a three-way share of their eighth consecutive Coliseum (or Crosstown) League crown with both the Golden Eagles and View Park, before bowing out in the first round of the CIF-LACS Division 1 playoffs at Venice, the earliest playoff exit in program history.

Angie Vargas would be named All-City Division 1 for POLA, who also returns Torstensen and Yolanda Racaza.

February 1 would start a cavalcade of signing day ceremonies at all three campuses.

Then for one final on-campus ceremony in November, Mary Star boys basketball guard Joseph Octave would sign with Air Force in what was just the third ever signing day ceremony held at Mary Star's current Taper Avenue campus.

10.  The 100 Goal Milestone For Briana Mancilla

In all of San Pedro Prep Soccer, no matter the gender, no one had ever scored 100 goals for an entire career, until January 19, 2018 at the Westwood Recreation Center.

in the 71st minute, POLA girls soccer midfielder Briana Mancilla was fouled, giving her that moment, on her specialty, a free kick that just skates past the New West Charter goalie for her third of the day, twelfth of 22 goals total for the 2017-2018 season, and her 100th of her illustrious career. Mancilla, now at Whittier College, became just the second in CIF-LACS girls soccer history to reach triple digits in goals for a single career that includes three All-City selections and a CIF-LACS Division 2 championship in 2017.

Look for the new year of 2019 to be just as good, and likely better to the Pirates, Stars and Polar Bears.