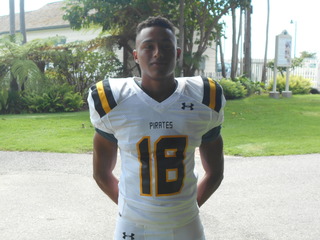 With the high school season once again closing in on San Pedro for both San Pedro and Mary Star Of The Sea High Schools, here are the 2015 Top Ten Prep Football Impact Players To Watch.

1) A.J. Frazier, San Pedro, WR/DB, sr.
Frazier is as explosive as they come with 515 all-purpose yards on rushing, receiving, kickoffs & punt returns and is a prime example of 'big players coming out in big games'. Frazier registered double-digit tackles against Narbonne, Banning & Carson, which is mainly why he was the sole league's Defensive Player Of The Year. In all, Frazier had 72 tackles, a forced fumble, fumble recovery, sack and 2 interceptions for the Pirates defensively.

2) Jacob Miller, San Pedro, QB, sr.
Last year was Miller's growth as a signal-caller with 14 TD passes, really showing great poise in last year's CIF-Los Angeles City Section Division I semifinal 33-30 loss to Carson, completing passes out of nowhere in the fourth quarter. With a veteran receiving group to throw to in 2015, this can be a breakout year for the three-year veteran. Miller threw for over 1,000 yards in his second year as a starter.

3) Vinny Lauro, Mary Star, RB/LB, sr.
Lauro led Mary Star in almost everything offensively, ran for over 1,000 yards, is a threat in receiving the ball, and he even threw for a touchdown. Lauro should flourish even more in the new regime of first-year coach Jason Gelber.

4) Mike Spinosa, San Pedro, TE/DL, sr.
Spinosa is a great target to look for in a tight end, a wonderful blocker, but on defense he's the Pirates' returning leader in sacks. Everything you need in a returning Marine League & CIF-Los Angeles City Section returning Lineman Of The Year, a first for tight ends.

5) Jarod Alves, Mary Star, RB/LB, sr.
Alves is very versatile, and does what the Stars need to be competitive in all facets. The returning All-Santa Fe League first team pick will be on the field a lot as he also handles all the kicking duties. Alves was the team's second leading rusher and receiver behind Lauro.

7) Christian Michaels, San Pedro, WR/DB, sr.
The returning All-Marine League first team defensive pick had 3 interceptions last season and is the only one for the Pirates who scored on both sides of the gridiron. Two of Michaels' picks were goal line INTs against the likes of Morro Bay and Roosevelt of Los Angeles, the other was a 'Pick 6' at Culver City.

8) Anthony Garcia, Mary Star, OL/DL, sr.
The returning All-Santa Fe League pick led the Stars in tackles for loss, while recovering three fumbles, one of which he returned for a touchdown against Don Bosco Tech of Rosemead.

9) Donte Huddleston, San Pedro, RB/DL, sr.
In one game against University of Los Angeles last season, Huddleston ran for a touchdown, caught a 68-yard pass for another TD, recovered a botched lateral, and blocked a punt for a safety. In another game against Gardena, he had 2.5 sacks. In the CIF-LACS D-I semifinal vs. Carson, he caught 2 clutch fourth quarter passes for 85 yards, the latter of which was a go-ahead 15-yard touchdown.

10 tie) Mikey Hernandez Jr., San Pedro, WR/DB, jr.
The two-sport standout also had 3 interceptions, was an excellent punter, and hits hard for a cover corner. He also has great smarts, evidenced by his 25-yard run off a 'fake' punt for a critical first down against Banning.