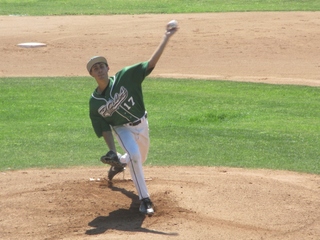 The 2016 San Pedro Prep Baseball season was another success, especially in the case of Port Of Los Angeles High baseball.

Co-coaches Brian and Dennis Emerson once again got the Polar Bears going in the right direction and didn't suffer a slow start like in the previous two seasons where they recovered just in time to reach two CIF-Los Angeles City Section Division III title games in a row, winning the crown in 2014. Also, senior left-handed pitching ace Fernando Rivas was brilliant in going after a second ring, pitching like there was no tomorrow at times.

In fact, Rivas threw POLA's first-ever seven inning complete perfect game, striking out 14 of 21 batters to pace the Polar Bears to a 2-0 victory over Northridge Academy on May 12 in a CIF-LACS Division III first round game played ironically enough at San Pedro High.

Despite the Polar Bears (15-9 overall) falling short 7-6 in the semifinals to eventual runner-up and Crosstown-Ocean League champion Harbor Teacher Prep on May 20, Rivas still did enough to become the 2016 San Pedro News Pilot Prep Baseball Player Of The Year, while the Emerson father-son duo earns Coach Of The Year honors after pacing POLA to a second place finish in the Crosstown-Ocean league at 10-2, handing Harbor Teacher Prep their only loss.

Rivas was stellar on the mound for POLA, going 10-4 with a 1.07 ERA, 117 strikeouts and guiding the Polar Bears to their sixth straight CIF-Los Angeles City Section Division III semifinal. The Marymount California University-bound Rivas also hit .403 with 11 RBIs for POLA.

Gentile was a fast center fielder who always came up with the knack for making the highlight reel catch, even robbing Rivas on a game-opening diving catch in a 11-0 victory for the Stars over POLA back on February 28 (Rivas didn't pitch that day), and he also swung a mighty stick, hitting for contact and power en route to a third straight All-Camino Real League selection.

The Stars went 14-12 overall, 6-6 in the Camino Real League under coach Rick Ibarra (second term, first year back) and lost 5-2 to Temple City on May 18 in a CIF-Southern Section Division 5 wild card game.

Meanwhile, Bumgarner would do it all for San Pedro, who slumped to 12-20 overall but still finished 6-4 in a highly-improved Marine League, a three-way tie for second place with Narbonne and Carson, and even won a CIF-LACS Division I wild card game on May 10, winning 6-4 at Sylmar. Bumgarner was excellent at third base and also pitched for the Pirates, who had seven All-Marine League players, who are all on the 2016 All-SPNP Prep Baseball Team.