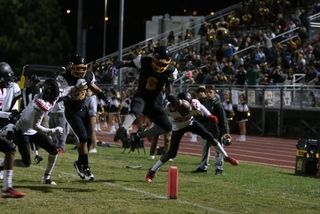 The 2017 San Pedro Prep Football season ended without a single postseason victory, but there was still plenty of excitement involved.

None more bigger than what took place on September 22 in Torrance.

After 36 years of torture, the Mary Star High football team finally conquered Bishop Montgomery with a 28-27 victory over the Knights for their first victory in the rivalry since 1981. Junior running back Luke Sabra's 90-yard touchdown run in the third quarter would be the spark plug the Stars needed to fire up after only trailing 9-7 at halftime, leading to the most spirited rendition of the school's alma mater when it was all over.

Sabra and fellow junior Edward Casiano would combine to run for 265 of the Stars' 304 rushing yards (Sabra had 160 of them on just five carries) and all four touchdowns to finally slay the Knights.

In spite of that massive turnaround for third-year head coach Jason Gelber, the Stars once again missed the CIF-Southern Section Division 13 playoffs after going 6-4 overall, but their 1-2 finish in the Santa Fe League (both losses coming to powers St. Anthony of Long Beach and St. Genevieve of Panorama City) would leave Mary Star out, just like last season.

Meanwhile over at San Pedro, the Pirates would somehow garner the final of eight spots in the inaugural CIF-Los Angeles City Section Open Division playoffs, which ended rather quickly in the quarterfinals with a 48-14 loss to eventual four-time champion, and CIF State Division 1-A champion Narbonne of Harbor City.

Probably even more head-scratching was that the Pirates went 2-3 in the Marine League to finish fourth place with a pair of close defeats at Carson and Banning, but the nonleague schedule which dealt the Pirates two more losses both came at the hands of CIF-SS Division 4 runner-up Downey and Lawndale, who finished with a perfect regular season and 11-1 record, all for the reason why San Pedro finished 5-6 overall under second-year coach Corey Miller.

Nevertheless, senior running back and linebacker Sean Davenport still emerged with a magnificent senior season for San Pedro, and is the 2017 San Pedro News Pilot Prep Football Player Of The Year.

The All-City second team offense and All-Marine League first team selection finished with 1,046 rushing yards on 169 carries and 14 touchdowns, also catching for another score and finishing with 1,210 all-purpose yards. Defensively, Davenport was just as solid with 49 tackles (31 solo), a fumble recovery, two forced fumbles and an interception.

PLAYER OF THE YEAR: Sean Davenport.

LINEMAN OF THE YEAR: Kaze Hayashi.

NEWCOMER OF THE YEAR: Isaac Colloca.

As we continue this special San Pedro News Pilot Class Of 2020 Spotlight feature series on student athletes at the San Pedro-based high schools whose senior years were cut short due to the coronavirus, here is our feature on San Pedro High School baseball infielder.In three years time, Duarte has carved his own path in a very athletic family as being a proven clutch…See More
4 hours ago
0 Comments 1 Promotion