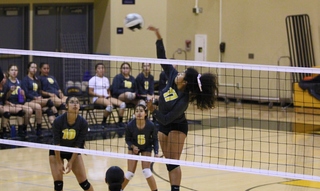 It was another exciting time for prep girls volleyball in San Pedro, California for 2017.

San Pedro High made history by becoming the first sports team from the third oldest school in the Los Angeles Unified School District by reaching an Open Division playoff format in the CIF-Los Angeles City Section in spite of their second place Marine League finish. The Pirates automatically qualified for the CIF State Regional playoffs as a result after going 1-2 in Open Division playoff competition, which culminated with a seventh place, five-set victory at league rival Narbonne of Harbor City on November 9.

One of the many catalysts of the Pirates' 15-12 season (9-3 in the Marine League) was senior middle blocker Selene Ramirez, who is one of the more gifted players around.

Not being recognized as much in her first two years, Ramirez made up for it in a big way, leading the Pirates in league play in kills and blocks, and also spearheading San Pedro's playoff run with the likes of junior outside hitter Sara Peterson, three-time All-Marine League first team senior libero Alison Lyons, rising All-Marine League sophomore setter Rosie Lopez, and yes, even her sister, All-Marine League freshman Serena Ramirez.

Even with all that balanced talent that didn't even garner an All-City selection, it still doesn't change the fact, or diminish the worth of Selene Ramirez, who also garners one final postseason honor with her All-Marine League first team selection... 2017 San Pedro News Pilot Prep Girls Volleyball Player Of The Year.

San Pedro's season ended with a three-set loss at La Reina of Thousand Oaks on November 15 in the first round of the CIF Southern California Regional Division 3 playoffs, but the Pirates continue to improve year-by-year under fourth year coach Christopher Ceballos.

It was not what you would have expected over at Mary Star Of The Sea High, but it still ended with a familiar finish to the regular season.

Gone were the core of nine seniors who played on three straight Santa Fe League championships and garnered a perfect 4-0 record in crosstown matches, including three-time SPNP Player Of The Year Ally Spillane, now at Eastern University in Philadelphia. Not to mention the Stars also had to make due with first-year coach Lauren Orebo at the helm and just three returning players.

Despite all that seemingly worked against them, and yes, their 22-match win streak in league was snapped by St. Bernard of Playa Del Rey on October 10, the Stars still managed to win a fourth straight Santa Fe League crown even with three losses, by turning back a two games to none deficit at upset-minded St. Pius X/St. Matthias of Downey on October 23 to win a thrilling five-set war and retain their championship for another year.

Orebo, who coached the Stars to a 12-15-1 record, is the 2017 SPNP Prep Girls Volleyball Coach Of The Year as she guided the Stars to their latest league crown with six All-Santa Fe League selections in SPNP Prep Girls Volleyball Most Improved Player senior Jillian Duran, along with sophomore outside hitter Marina Erosa, junior libero Jena Denardo, senior defensive specialist Hanalei Emnace and the freshman duo of outside hitter Sammie Sabra (Mary Star's leader in kills) and setter Lily Ruggerio.

Mary Star would have their season end with a thud in a straight set loss to Heritage Christian of Northridge in the first round of the CIF-Southern Section Division 7 playoffs.

Also over at Port Of Los Angeles, first-year coach Alexis Camou inherited a gritty group of Polar Bears who made things difficult for the rest of the Crosstown League, as they went the distance for five sets in six of their ten league games, winning three of them, including a remarkable two games to none comeback to hand eventual league champion New West Charter their lone league loss on September 18.

Senior outside hitter Areelle Navarro, the Polar Bears' go-to weapon for three years, is our Most Outstanding Player after posting yet another solid season for POLA, who finished 9-11 overall, and third place in league at 6-4 before falling in three sets to Valley Academy Of Arts & Sciences of Granada Hills in the first round of the CIF-LACS Division 3 playoffs.

As we continue this special San Pedro News Pilot Class Of 2020 Spotlight feature series on student athletes at the San Pedro-based high schools whose senior years were cut short due to the coronavirus, here is our feature on San Pedro High School baseball infielder.In three years time, Duarte has carved his own path in a very athletic family as being a proven clutch…See More
3 hours ago
0 Comments 1 Promotion