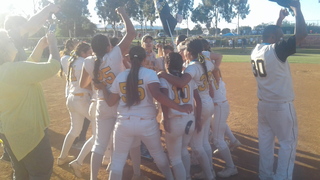 2017 was a really good year for high school sports in San Pedro, California.

There were eight signing day ceremonies combined over at San Pedro, Port Of Los Angeles and Mary Star Of The Sea High Schools.

A long, torturous losing streak finally came to a close.

A long league championship streak would continue yet again.

And yes, there was plenty of excitement along the way with the beginning of Alice M. Baxter High School, the newest school on the block, competing on the varsity level.

No one expected much out of San Pedro and third-year coach Robert Whitney at the start of 2017 considering the Pirates were coming off three straight CIF-Los Angeles City Section Division 1 first round exits.

Still, a team with an unshakable measure of confidence and belief in themselves would dig down deep and took care of business when it mattered.

An experienced team would guide the Pirates through the Marine League with a 9-1 mark, and close the season winning 18 out of their final 20 games, and final ten games in a row, culminating with a 2-1 victory over league rival Banning of Wilmington at Cal State Dominguez Hills on May 20 for the program’s 17th CIF-LACS championship, and first since winning a fourth straight crown in 2009.

Ever since the POLA girls soccer program began in 2011, the Polar Bears flirted with greatness from the word 'go', reaching four CIF-LACS finals in Divisions 3 & 4 during the 2012, 2013, 2015 and 2016 seasons... only to come up empty handed with narrow, heartbreaking setbacks.

POLA would dominate the Crosstown League again en route to a seventh straight undefeated league crown, and they did it with a devastating attack as six girls scored ten or more goals the entire season with Anna Vidovich (Stevens Institute Of Technology), Briana Mancilla, Keely Bales, Natalia Iniguez, Gisselle Mora and Britney Delgado scoring a combined 101 of the Polar Bears' school record 125 goals.

Not to be outdone was the defense paced by goalie Katelyn Viducic and stellar defensive play from Crosstown League MVP Christy Messner, Kendall Dimson and Alyssa Medrano.

Being moved up from Division 4 to 2 due to competitive equity, it would provide POLA's stiffest playoff challenge yet, but they still earned the second seed and found a way to reach the championship final on March 3, battle top-seeded Grant for 108 minutes before Mora’s golden goal in sudden death provided the Polar Bears a heart-stopping 2-1 victory for their long overdue first CIF crown.

In all, POLA finished 18-4 overall after suffering a 3-1 loss in the CIF State Division III regional to eventual champion South Torrance, but they accomplished what they set out to do from the start of the season.

The Mary Star boys hoopers made a marvelous run to the CIF-Southern Section Division 4A semifinals on the strength of an impeccable will to win under first-year head coach Mike Sestich.

After disposing of Oxford Academy in the first round, the Stars won back-to-back tense road affairs at Burroughs of Ridgecrest, 46-43 in the second round, then toppling highly regarded Pacific of San Bernadino, 103-102 in triple overtime before their run finally ended at home with a semifinal loss to Shalhevet of Los Angeles, a game the Stars were in until the final 84 seconds.

It hasn't stopped yet for the program, as the Stars closed out 2017 by starting the current season at 12-1 with monster victories over Palos Verdes, El Segundo, South Torrance, and even knocking off Shalhevet in a nonleague rematch. Not to mention Mary Star also captured the Milken Tournament with a 93-71 triumph over Milken, who also won the CIF-SS Division 4A title by defeating Shalhevet.

4. The Knight Slayers: 36 Years Of Torture Is Over

Not since 1981 has the Mary Star High football team experienced something like they did on September 22 on a cold night in Torrance.

Down 9-7 at the half, the Stars were not going to take yet another year of being overrun by Bishop Montgomery of Torrance and all it took was a 90-yard sprint to the end zone from running back Luke Sabra to get things rolling for the surging Stars, who were coming off a 60-7 shellacking by Pasadena Poly the week before. No one could have imagined the euphoria when the final whistle blew and Mary Star realized it achieved what outsiders seemed impossible, a 28-27 victory over Bishop Montgomery.

The postgame alma mater wouldn't be sung any better, louder, or with so much passion by the Mary Star contingent after the nightmare finally ended.

Behind second-year co-coaches Crystal Valdes and Chatelaine Ansaldi, the Pirate girls soccer program continues to rule over the rest of the Marine League, as they once again turned back the challenge of rival Narbonne of Harbor City with an emphatic 4-0 shutout victory on February 1 to seal up a twelfth consecutive league crown. Two-time All-City selections Maddie Villela and Sydney Engel made for an extremely difficult duo to contend with, goalie Carlene Luna was sensational again, and now junior midfielder Samantha Martinez emerged as another playmaker for San Pedro during their run to the CIF-LACS Division 1 quarterfinals and a second straight Lady Pirate Cup championship, also garnering a third straight win over neighbor Port Of Los Angeles to boot.

Ever since November 2014… signing day ceremonies in San Pedro Prep Sports are starting to become a trend for hard working student-athletes who put in the work both academically, and athletically, to become known.

Right after Villela signed, San Pedro football senior two-way lineman Nick Ford, after receiving 21 offers and narrowing them down to three Pac-12 Conference schools in the prior weeks, would finally settle in on playing defensive tackle at Utah for coach Kyle Whittingham and the Utes.

Two more would make their choices clear in the later stages of Spring.

On May 11, 2017… Mary Star High girls volleyball senior outside hitter Ally Spillane would sign her NLI to Eastern University in Philadelphia, Pennsylvania. Then on June 26, 18 days after graduating from San Pedro High, softball catcher Andrea Cline would become the second Pirate to sign with Marymount California.

History would be made at the start of 2017 when Alice M. Baxter High School, the new kid on the block on 9th and Pacific Avenue, would finally have their first official varsity sports event.

On January 9, it would be neighbor POLA of all schools, that was the first opponent for Baxter in both boys and girls basketball at Peck Park, and it wasn’t a good beginning for the Kraken as the Polar Bear boys won 61-19, and the Polar Bear girls won 43-17. However, Baxter ended up getting the win over the POLA boys a week later due to the Polar Bears’ use of an ineligible player, and the Baxter girls team got their first victory, 33-27 over Simon of Los Angeles on February 7 at Peck Park.

Coach Christopher Ceballos had high hopes for the 2017 Pirate girls volleyball team, but little did he expect that the Pirates would exceed most of his expectations as by virtue of their CIF-LACS Open Division playoff berth (a first for any San Pedro High sports program), they automatically qualified for the CIF State Southern California Regional playoffs.

On March 30, San Pedro would be hit with a devastating array of news when JV player Evan Jimenez, was the victim of a brutal beating while he was walking home. It brought their entire community together and miraculously by the grace of God and quick thinking from three sisters, not to mention all the prayers from supporters, teammates, his family and others, he made a triumphant return two weeks to throw out the first pitch of the junior varsity game against Banning.

Then later on April 24, the Pirates jumped on Banning early before holding on for a 6-4 victory to capture their first Marine League championship in five years.

Freshman Josh Duarte brought in three runs with a sacrifice fly and a two-run double in the first two innings, while strong pitching from David Barraza and Daniel Lopez would be enough for San Pedro to secure the win. The Pirates would end up in the CIF-LACS Division 1 quarterfinals, where it fell at home to El Camino Real.

Not resting on her laurels after a monumental 2016 season, the New Mexico State signee would post another magnificent season, all the while the rest of Polar Bear softball came along for the ride, as they won a seventh straight undefeated Coliseum League championship, but not without another stiff test in two close victories over Harbor Teacher Prep.

Along the way, the Polar Bears took on, and in most cases, defeated, top notch teams en route to a 31-2-2 record and a fourth straight CIF-LACS Division I semifinals berth, falling short in a bid to set up an All-San Pedro championship game with a 3-1 loss to Banning at Leland Park on May 17.

Look for the new year of 2018 to be just as good, and likely better to the Pirates, Stars and Polar Bears.

As we continue this special San Pedro News Pilot Class Of 2020 Spotlight feature series on student athletes at the San Pedro-based high schools whose senior years were cut short due to the coronavirus, here is our feature on San Pedro High School baseball infielder.In three years time, Duarte has carved his own path in a very athletic family as being a proven clutch…See More
3 hours ago
0 Comments 1 Promotion